Rep. Ilhan Omar made several comments which were widely viewed as antisemitic in her first weeks in office. As part of her defense, she offered the following:

“what I am fearful of is that because [Rep.] Rashida [Tlaib] and I are Muslim, that a lot of Jewish colleagues, a lot of our Jewish constituents, a lot of our allies, go to thinking that everything we say about Israel, to be anti-Semitic, because we are Muslim.”

Omar claimed that people – Jews in particular – think that she is more inclined to be anti-Semitic because she is Muslim. Why would she make that accusation? Are Jews particularly paranoid about Muslims?

The New York Times decided to write a large article about AIPAC because of Omar’s comments attacking the pro-Israel lobby in an article called “Ilhan Omar’s Criticism Raises the Question: Is AIPAC Too Powerful?” on March 4, 2019. Perhaps the Times will soon do a follow up article asking whether Jews really know how to ‘hypnotize‘ the world the way that Omar also claimed. 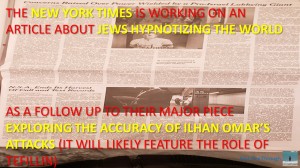 As The New York Times goes through great lengths to not label Muslims or Palestinian Arabs as anti-Semites (only Israelis are racists), the paper will likely never examine this other charge made by Omar. So it is worth doing such analysis here to see if either of Omar’s assumption are correct: that Muslims are particularly anti-Semitic or that Jews unfairly think that Muslims are anti-Semitic.

Before investigating Muslim antisemitism, let’s consider whether there is a poisonous Muslim anti-Zionism that is more acute than Christian, Hindu or other religions approach to the Jewish State, since Omar claimed that the essence of her attacks were really against Israel, not Jews.

Muslim nations have attacked Israel physically and economically since the re-establishment of the Jewish State in 1948. The Muslim-majority countries also attempt to dismantle Israel diplomatically at the United Nations and lobby Israel’s major sponsor, the United States, to abandon the cause of the Jewish State. The Muslim country assaults are in sharp contrast to non-Muslim nations which almost all have diplomatic relations and are active trading partners with Israel.

CHECK. Muslims are much more anti-Zionist than non-Muslims.

Beyond the Muslim attacks against the Jewish State, how have Muslims treated Jews over the past century?

Antisemitism is prevalent in both Muslim majority countries and among Muslims who live in Christians countries.

CHECK. Muslims are much more antisemitic than non-Muslims around the world.

Some people who attack Israel do so because they feel that Israel mistreats Palestinians. They have argued that the Israel-Palestinian Conflict is simply one about land and has nothing to do with a clash of religions. Or to be more clear, they believe Palestinian Arabs don’t hate Jews, just the group of foreigners who took over their land.

Below is a review whether Palestinians hate the Jewish State, hate Jews and Judaism, or simply want to have independence and sovereignty, with no hatred at all (perhaps just frustration).

These are not competing claims over land, This is an evil, raging rant of antisemitism that has never been defeated or kept in check. Unlike American racism including the horrible lynchings and attacks on blacks in the American South which were finally countered with marches and changes in law, and the evil of Nazi Germany’s antisemitism which was vanquished in a war defeating their army and wicked worldview, Muslim antisemitism has metastasized. It has been ignored, excused, encouraged and empowered for the past 100 years.

Ilhan Omar asked a question about why Jews think that Muslims are anti-Semitic, and the alt-left has run to her side with fig leaves. While the left-wing media has sought to examine her charges of the powerful Jew, it refuses to report on the rampant Muslim antisemitism in Muslim countries, around the world, in the United States and Israel itself.

Ilhan Omar – and much more importantly, everybody else – here is the answer to your question about whether Jews unfairly criticize Muslims or whether Muslims really are anti-Semitic.

In the Shadow of the Holocaust, The New York Times Fails to Flag Muslim Anti-Semitism

The Real “Symbol of the Conflict” is Neta Sorek

A Review of the The New York Times Anti-Israel Bias

A Response to Rashid Khalidi’s Distortions on the Balfour Declaration

Will Israel Also Remove an Umbrella from the Western Wall Plaza?

The Only Religious Extremists for the United Nations are “Jewish Extremists”

The UN Looks to Believe the Palestinians (music by Rod Stewart)