The FBI released its annual report of Hate Crimes for 2018 this week. It’s always a sad report to learn about the number of attacks committed against people for who they are, whether for their race, religion or sexual orientation. These are crimes between complete strangers, who simply attack other people because of bias.

What was not covered was that an average Jew was almost three times as likely to be attacked as an average black person (896 attacks against a Jewish population of 5.4 million compared to 2,325 attacks against roughly 40.5 million black people). The news also didn’t cover that Hispanics continue to commit the fewest number of hate crimes, even while they are trending upwards (committing 7.5% of all hate crimes in 2018, up from 6.0% in 2016, even though they account for close to 17% of the population).

More disturbing, was the enormous increase in hate crimes committed by black Americans. 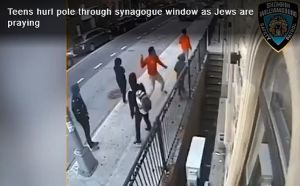 Is black antisemitism on the rise because of the vile speeches of Nation of Islam’s Louis Farrakhan? From the BlackLivesMatter platform that vilified the Jewish State as participating in apartheid? That the mayor of New York (who is married to a black woman) decided to ignore black antisemitism, where an average Jew is 13 times more likely to be the victim of a hate crime than an average black person? That progressives have embraced the notion of intersectionality and joined forced with radical black and Muslim voices in attacking Jews as part of the white elite establishment which must be torn down?

Eleven Jews were murdered in the United States in 2018, just for being Jewish, compared to four black people and three white people killed for the color of their skin. There were four times the number of anti-Jewish attacks as anti-Muslim. But the media will tell you that ‘Islamophobia’ is the major problem while the candidates for president solely focus on racism against blacks.

There was a time when blacks and Jews stood together against hatred and when black leaders celebrated the Jewish State. But those days seems to be long gone, with only a few voices like Chloe Valdary raising their voices in support of Jews and the Jewish State, and clearly rebuking antisemitism.

The black and Muslim progressive alliance may not only be pushing America against the Jewish State; it may be also be encouraging blacks to attack American Jews.

Don Lemon, Here are Some Uncomfortable Facts about Hate Crimes in America

Anti-Semitism Is Harder to Recognize Than Racism