There has rarely been a pro-Palestinian march around the world without the chant “From the River to the Sea, Palestine Will be Free.” It is a chant for the destruction of the only Jewish State. 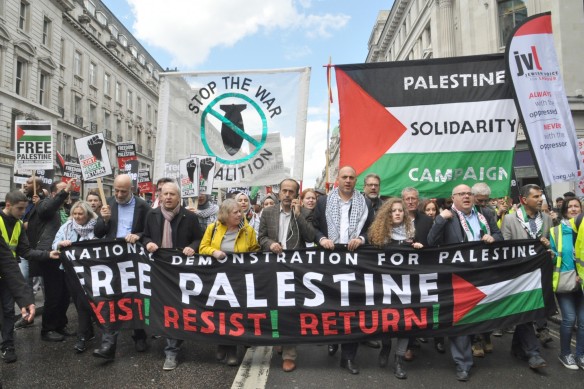 One sees the phrase on placards in Europe. One hears it in the streets of the United States.

It is the official charter of HAMAS, a terrorist organization and an official Palestinian political party, the ruling authority of Gaza.

The destruction of Israel has long been the desire of its neighbors since the state was re-established in 1948, prompting five Arab armies to invade the country to destroy it. Through wars, boycotts and terrorism, the craving has persisted in much of the Muslim world.

Yet the liberal media has decided to ignore the genocidal antisemitic intent of the chant. In Europe, the slogan is considered a pro-Palestinian anthem which has nothing to do with the destruction of Israel. In the United States, The New York Times is loathe to call any actions or comments by the Palestinians or their supporters as antisemitic.

So as Israel considers breaking the impasse in the region in which the Palestinian Authority refuses to negotiate with Israel and Hamas continues to attack Israel, it is remarkable to see The New York Times suddenly address the call “from the river to the sea” as a right-wing ISRAELI message.

On May 20, 2020, the paper published an article about acting-President of the Palestinian Authority Mahmoud Abbas calling to cancel security agreements with Israel because Israeli Prime Minister Benjamin Netanyahu has called for applying sovereignty to areas of the West Bank which were acknowledged by the PA to be under full-Israeli control in the 1995 Oslo Accords. The article wrote:

“With the peace talks non-existent for years, many right-wing Israelis have urged Mr. Netanyahu to extend sovereignty over the West Bank on ideological and religious grounds, believing the Jewish state should control the entire Holy Land from the Jordan River to the Mediterranean. Evangelical Christians who are key supporters of President Trump have also backed the effort.”

The article failed to mention that the Israeli government gave much of the “West Bank” to the Palestinians in 1995 and 1997 despite repeated terrorist attacks. It did not mention that Israel gave Gaza to the Palestinians in 2005. The paper did not refer to the April 14, 2004 letter from US President George W Bush to Israeli Prime Minister Ariel Sharon which stated clearly:

“In light of new realities on the ground, including already existing major Israeli populations centers, it is unrealistic to expect that the outcome of final status negotiations will be a full and complete return to the armistice lines of 1949, and all previous efforts to negotiate a two-state solution have reached the same conclusion. It is realistic to expect that any final status agreement will only be achieved on the basis of mutually agreed changes that reflect these realities.”

Instead, the anti-Zionist paper called the application of sovereignty a move by religious radicals, not people who seek a secure Jewish State and an end to the stalemate.

The New York Times has been an apologist for radical Palestinian antisemitism for years. It has now re-branded the anti-Zionist chant “from the river to the sea” as a Zionist one, and newly cast it as the mantra of Jewish and Christian religious zealots.

The Hebron Narratives: Is it the Presence of Jews or the Israeli Military

7 thoughts on “For The New York Times, “From the River to the Sea” Is The Chant of Jewish and Christian Zealots”