Some passionate and eloquent liberals have bemoaned the state of inclusiveness among Jews today. Leon Wieseltier, editor of the New Republic, penned an angry piece “J Street’s Rejection Is a Scandal” about the exclusion in 2014 of J Street from the Conference of Presidents of Major American Jewish Organizations. Angry voices are again being heard about J Street due to their position in favor of the Iranian nuclear deal promoted by the Obama administration. Is Wieseltier correct in that we only seek to hear our own voices and that “the orthodoxies and the bubbles and the closed loops and the echo chambers are everywhere?” Is there a “red line” that J Street and others have crossed and therefore deserve to be excluded from the broad tent of acceptable conversation?

Many countries have laws that ban hate speech. Sometimes the exact language is clearly spelled out about what cannot be said publicly and sometimes it is more general in nature.

For example, several European countries, including Germany, have laws that prohibit Holocaust denial. Those countries took such steps not simply because such expressions offend Jews, but because of the continent’s failure to step in and protect Jews which led to their slaughter. Silence became complicity which must never be allowed to happen again.

For its part, the United Nations Human Rights Council adopted Resolution 16/18 whose goal is “Combating Intolerance, Negative Stereotyping and Stigmatization of, and Discrimination, Incitement to Violence and Violence Against, Persons Based on Religion or Belief.” The resolution was drafted principally at the behest of Islamic countries who were worried about the spread of “Islamophobia.”

The various laws against hate speech all seek to curtail an incitement to violence and harm. The banned speech relates to a specific group of people (ie. Muslims) and not a concept (for example, a religion like Islam).  While a person can legally say disparaging remarks about a concept (“Communism is evil”), one risks breaking the law by attacking a group of people (“All Communists should be beaten up”).

Hate Speech laws are typically drafted against individuals. However, laws are also drafted against groups that incite violence.  Israel banned two political parties, Kach and Kahane Chai in 1994 as they were defined as terrorist organizations.  The groups’ ideology was based on the teachings of Rabbi Meir Kahane who called for expelling Arabs from Israel, thereby running afoul of the premise of calling for negative actions against people.  Israel has also banned some Arab parties from running in elections which supported terrorism.

Liberals and J Street supporters feel that BDS (Boycott, Divestment and Sanctions), Hamas and the Iranian nuclear deal should be rightly within civil discourse.  However, do these topics and groups support violence against people, or are they just broad discussions about policies and ideas?

BDS: Reasonable people can arrive at different conclusions about Jewish settlements in Judea and Samaria. Some feel that all the settlements are completely legal as called for in international law in 1922, while others feel that Jews living east of the Green Line is against international law as recently stated by the UN Secretary General. Those competing viewpoints would fall within legal and acceptable conversation, both in public society and in an open-minded pro-Israel community.

However, inciting hatred against settlers is inciting violence.  Calling on the economic strangulation of Jews who legally purchased homes and businesses is akin to hate speech.  As such, new laws are being passed which specifically outlaw supporting BDS.

Hamas: Hamas is a rabidly anti-Semitic organization that calls for the complete destruction of Israel. It has fired well over 10,000 rockets into Israel, killed thousands of people in hundreds of attacks. Since completely taking over Gaza in 2007, Hamas has engaged in three wars against Israel.

Supporting Hamas in any way is supporting terror.  It should be banned completely in public society and in the pro-Israel tent.

Iranian nuclear deal: The Iranian nuclear agreement took various turns over the past several years. As Iran openly calls for the destruction of Israel, any group supporting Iran or helping Iran obtain weaponry would be supporting violence against Israel.

While the Iranian deal may arguably slow down Iran’s pathway to nuclear weapons, it certainly gives Iran tremendous financing and weaponry.  As such, 78% of Israelis oppose the Iran deal in its current format.

J Street has taken provocative stances on these three issues.

On these issues which directly harm Israelis and the state of Israel, J Street has sided against the stated desires of the government of Israel.  Each time, they have taken stances which closely align with Israel’s enemies which seek to harm the country and its citizens.

Further, and most alarmingly, J Street has urged the Obama administration to vote against Israel at the United Nations Security Council, which is the sole voice of support in many instances. That action was so reprehensible, that even devout liberal politician Gary Ackerman (D-NY) said “I’ve come to the conclusion that J-Street is not an organization with which I wish to be associated….America really does need a smart, credible, politically active organization that is as aggressively pro-peace as it is pro-Israel. Unfortunately, J-Street ain’t it.” 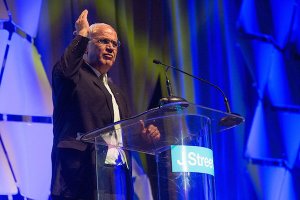 A Related View from Tisha b’Av

The Talmud relates a story about the reason the Second Temple in Jerusalem was destroyed:

In Gittin 56ab the Talmud tells the story of zealots who wanted to fight the Romans as they got ready to attack Jerusalem. These zealots burned decades worth of food that had been stored in Jerusalem in order to force the residents of the city to confront the Romans.

These zealots undoubtedly considered themselves pro-Jewish. They thought that by destroying all safeguards and alternative options, they could force the rest of the Jewish people to adopt their position in the battle against Rome.

J Street, like the zealots 2000 years ago, view themselves as pro-Israel. While some parts of the Arab and Muslim world (f/k/a Romans) may seek to attack and destroy Israel, J Street views their approach to the conflict as the only logical course of action.  As such, they have engaged in co-opting the US government to take positions against those sought by the government of Israel.  Like the zealots who burned all of Jerusalem’s food supplies (now known as US support), they feel that Israel stripped of all of the territories won in 1967, without a Gaza blockade, and with a nuclear pact in place with Iran will secure Israel’s future. J Street is pursuing global and US pressure to make that happen, rather than seeking to convince the Israeli government. 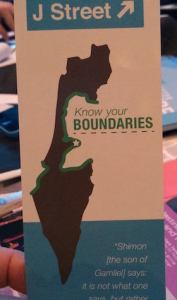 In the minds of many, the J Street positions have made them the a modern-looking version of Neturei Karta, the anti-Zionist Chasidic sect, similar to the clean-shaven Jewish outreach people who market a more modern version of Chabad outreach.

Debating the merits of different approaches for how Israel deals with hostile neighbors is within constructive debate.  Consistently arguing in favor of Israel’s enemies that seek to destroy the country and kill its people is akin to inciting violence.

Review the statements and positions of J Street here and consider whether such voices deserve to be heard in your community.

A Disservice to Jewish Community

30 thoughts on “The Fault in Our Tent: The Limit of Acceptable Speech”