Many people have argued that it is illegal for Israelis to live beyond the 1949 Armistice Lines (east of the Green Line, EGL/Judea and Samaria/West Bank).  The question of “legitimacy” (not legality) has been repeated often by the USA’s Obama Administration.  Those comments are more harsh towards Israel than prior American administrations that simply viewed new settlements as “unhelpful” to a peace agreement between Israel and the Arab states.  Jimmy Carter was the only US president that actually called the settlements “illegal”.  Below is a review of the international laws that apply towards the settlements. 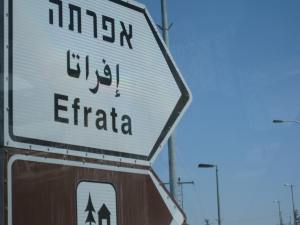 Article 49 of the Fourth Geneva Convention deals with the treatment of “occupied territory“.  It is unclear whether it applies to territory obtained in both offensive and defensive wars, but this review will assume that the law stands in either case.

The majority of Article 49 is about the treatment of the inhabitants of the occupied territory and not about the “Occupying Power” transferring in its own population.  The opening paragraph:

“Individual or mass forcible transfers, as well as deportations of protected persons
from occupied territory to the territory of the Occupying Power or to that of any other country, occupied or not, are prohibited, regardless of their motive.”

This paragraph does not relate to Israelis living in EGL for several reasons:

The next paragraphs deal with exceptions to the main directive stated above for military reasons:

“Nevertheless, the Occupying Power may undertake total or partial evacuation of a given area if the security of the population or imperative military reasons so demand. Such evacuations may not involve the displacement of protected persons outside the bounds of the occupied territory except when for material reasons it is impossible to avoid such displacement. Persons thus evacuated shall be transferred back to their homes as soon as hostilities in the area in question have ceased.”

“The Occupying Power undertaking such transfers or evacuations shall ensure, to the greatest practicable extent, that proper accommodation is provided to receive the protected persons, that the removals are effected in satisfactory conditions of hygiene, health, safety and nutrition, and that members of the same family are not separated. The Protecting Power shall be informed of any transfers and evacuations
as soon as they have taken place. The Occupying Power shall not detain protected persons in an area particularly exposed to the dangers of war unless the security of the population or imperative military reasons so demand.”

As seen above, almost the entirety of Article 49 of the Geneva Convention has to do with the local population- in this case, a theoretical transfer of Arabs out of EGL/Judea and Samaria/West Bank.  Only the last paragraph addresses the civilians of an “Occupying Power”.

“The Occupying Power shall not deport or transfer parts of its own
civilian population into the territory it occupies.”

Another law that people contend relates to Israel’s administration of EGL/West Bank is Article 55 of the Hague Regulations:

“Art. 55. The occupying State shall be regarded only as administrator and usufructuary of public buildings, real estate, forests, and agricultural estates belonging to the hostile State, and situated in the occupied country. It must safeguard the capital of these properties, and administer them in accordance with the rules of usufruct.”

This rule clearly affirms Israel’s role as administrator for public lands.  The Hague regulations – and this provision in particular – deal with situations that are temporary in nature, and are impractical for those that last for decades.  To wit, the Arab population in the West Bank has grown four times since 1967, in one of the largest population increases on the planet. New infrastructure was established to accommodate the growth in the region, and Israel authorized these new homes, roads and other infrastructure, thereby necessitating a change to public lands.

In terms of minimizing the changes to public lands, it is unclear whether the role of Israel is to maintain a status quo according to the laws of Jordan, which illegally seized and annexed the area, or to administer the region according to British laws which had an international mandate before the Jordanians took control.

Therefore, to comply with Article 55 above, which rules were appropriate for Israel to maintain: the illegal occupying Jordanian laws of 1949-1967 or those accorded in international law in the British Mandate 1922-1948?

If the British laws regarding property were to be maintained, then those laws state that no person should be forbidden to live in any part of the entirety of the Mandate (including Gaza, Israel and the West Bank) on the basis of religion, per Article 15 of that 1922 Mandate:

“The Mandatory shall see that complete freedom of conscience and the free exercise of all forms of worship, subject only to the maintenance of public order and morals, are ensured to all. No discrimination of any kind shall be made between the inhabitants of Palestine on the ground of race, religion or language. No person shall be excluded from Palestine on the sole ground of his religious belief.”

As it relates to the use of public lands (which is the focus of Article 55 of the Hague Regulations), the British Mandate clearly states that public land is to be used for Jewish settlement:

“The Administration of Palestine, while ensuring that the rights and position of other sections of the population are not prejudiced, shall facilitate Jewish immigration under suitable conditions and shall encourage, in co-operation with the Jewish agency referred to in Article 4, close settlement by Jews on the land, including State lands and waste lands not required for public purposes.”

Administration under British law encouraged Jews to live throughout Judea and Samaria, including state lands, and it can therefore not be illegal for any Jew to live there.

The only possibility that Jews moving to and living in the West Bank could be considered illegal, was if Jordanian law was to be maintained in the area.  However, even if one were to assume that despite the Jordanian’s forcible seizure and illegal annexation of the area, that their laws should still be maintained, could any law possibly suggest that it be a requirement to maintain particular laws that were flagrant violations of the Geneva Convention such as the racist Jordanian laws that evicted and barred Jews from living in the land?

Even further, if Israeli actions of Jews moving to EGL/West Bank were somehow considered illegal (which is not the case), Article 3 of the Hague Resolution states that a “belligerent party which violates the provisions of the said Regulations shall, if the case demands, be liable to pay compensation,” so remedy would be a fine, not eviction of the Jews.

Since 1967, the United Nations crafted various resolutions condemning Israel for a wide variety of perceived “sins” such as the infamous “Zionism is Racism” resolution in 1975.  Many resolutions have inverted the meaning of the Geneva Convention such as a UN Security Council Resolution in 1980 which “Deplor[es] the decision of the Government of Israel to officially support Israeli settlement in the Palestinian and other Arab territories occupied since 1967.”  It continued further:

“[A]ll measures taken by Israel to change the physical character, demographic composition, institutional structure or status of the Palestinian and other Arab territories occupied since 1967, including Jerusalem, or any part thereof, have
no legal validity and that Israel’s policy and practices of settling parts of its population and new immigrants in those territories constitute a flagrant violation of the
Fourth Geneva Convention relative to the Protection of Civilian Persons in Time of War and also constitute a serious obstruction to achieving a comprehensive,
just and lasting peace in the Middle East;”

Arguing that “new immigrants” (many of whom were actually returning residents from 1949) are a threat to the security of the existing population is xenophobia at its most extreme.  Arguing that is a “flagrant violation of the Fourth Geneva Convention” is disproved above.

The inclusion of Jerusalem in the United Nations attacks on Israel is telling.  Greater Jerusalem and Greater Bethlehem were planned to be an international “Holy Basin” according to the UN 1947 Partition Plan – neither Arab nor Israeli.  After Jordan attacked Israel and seized the eastern half of Jerusalem and annexed it, the United Nations remained silent.  The UN issued no declaration against the Jordanian invasion and land grab for the entire period it held the territory through 1967.  However, when Israel took control of Jerusalem and later annexed it in 1980, the United Nations went on tirades about the illegal nature of Israel’s authority. The UN’s motions are absurd and duplicitous in granting tacit approval to the Jordanian Arab illegal annexation of Jerusalem and condemning Israel for its annexation. If Jordan’s offensive war to take a planned international city was viewed as permissible, how can Israel’s defensive war be viewed any less so?

The ongoing dynamic in Jerusalem is also different than the rest of EGL/West Bank since the eastern part of the city was annexed by Israel and all of the residents were offered citizenship (almost all of the Arabs declined and took residency papers instead). As such, clauses in international law about offering citizenship to people are not applicable to the eastern half of Jerusalem (while still relevant in the remainder of EGL/West Bank).

As reviewed above, Israel abides by the global rules of international law relating to Jews living in EGL.  However, the United Nations reinterpretation of law solely as it relates to Israel – whether for national movements like Zionism, or for allowing Jews to move and live freely like other peoples in lands they lived in for thousands of years – is not law, but anti-Semitism.

Hague Resolution Article 40: “Any serious violation of the armistice by one of the parties gives the other party the right of denouncing it, and even, in cases of urgency, of recommencing hostilities immediately.“

Summary of US administrations attitudes towards Israeli settlements: http://www.cmep.org/content/us-statements-israeli-settlements_short#Obama

46 thoughts on “The Legal Israeli Settlements”