Exactly eighteen months ago, many Americans were debating the proper protocol and response to a particular invitation.

Israeli Prime Minister Benjamin Netanyahu accepted an invitation from the US Speaker of the House of Representatives, John Boehner, to address a joint session of Congress.  As Netanyahu had not followed protocol in notifying the White House before accepting the invitation, and because Netanyahu was going to speak against the Iranian nuclear deal that Obama crafted, Obama organized a boycott of Bibi’s speech by many fellow Democrats.

As described in “On Accepting Invitations,” Obama had treated Israel badly regarding invitations once before – when Obama declined the 2013 invitation to speak to the Israeli Knesset.  Obama opted instead to use that same time to address college students, because Obama wanted to address Israelis “directly,” as if Israel wasn’t a democracy and the Knesset didn’t represent the country’s attitudes and interests. (The equivalent would be Netanyahu turning down addressing Congress, and then going up the road to the DC Convention Center to address selected college students about the Iranian deal).  Not nice.

In July 2016, the Republican National Convention (RNC) had its own dynamics regarding invitations and addresses, particularly of Senator Ted Cruz and Rabbi Haskel Lookstein.

Cruz had a long and contentious fight with Donald Trump for the Republican nomination.  Many of the Republican candidates, like Governor John Kasich and Senator Lindsey Graham, had a severe dislike of Trump, and opted to stay away from the Republican convention.  Cruz elected to accept the invitation and address the audience.  However, during his speech, rather than endorse Trump, Cruz told the audience to “vote your conscience.”

He was loudly booed by the crowd.

It seems like some politicians – such as Cruz and Obama – do not understand some basic guidelines to accepting an invitation: be gracious and accept if you can; be a good guest and your host should be generous and courteous.

How did non-politicians do at the RNC?

Rabbi Haskel Lookstein Does Not Address the RNC

Donald Trump’s daughter, Ivanka, asked her rabbi if he would lead a moment of prayer at the RNC.  Rabbi Haskel Lookstein, who oversaw Ivanka’s conversion to Judaism was touched by her request and immediately said yes.  He wrote his speech and went to get a new suit for the occasion.  He was then surprised by an outcry from his community.

Not long after the news of his address became public, “Never Trump” members of his synagogue, Kehilat Jeshrun, and graduates of the Ramaz school where Rabbi Lookstein served as Principal Emeritus, bombarded him with petitions to withdraw from the event. 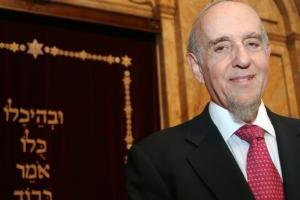 “We, the undersigned, are outraged that Rabbi Haskel Lookstein – rabbi emeritus of Congregation Kehilath Jeshurun and the Ramaz School – has decided to lend his blessing to Donald Trump and speak at the Republican National Convention.

Donald Trump openly spouts racist, misogynistic rhetoric; he advocates torture, the expulsion of millions of families, some long settled in America, and insinuates that some citizens of this great country are somehow less than others.

To embrace Trump and Trumpism goes against all we’ve been taught. As graduates of Ramaz, and as current or former members of the Modern Orthodox community, this is a shanda beyond the pale.

The petition concluded with:

“This is beyond politics, not a question of left or right, but a question of human decency — and you have decided to embrace and politicize hate. Not in our name. Today we are ashamed to be Ramaz graduates.

Please reconsider your public support of this dangerous man — the future of our country, not to mention your own legacy, is at stake.”

In response to the protests, Rabbi Lookstein withdrew from speaking, even as he disagreed with the petition.  In an email addressed to his constituents he wrote the following:

“Dear Ramaz Family,
When Ivanka Trump, a member of our congregation, invited me to deliver the opening prayer at the Republican National convention next Monday,  I made a personal decision to honor her request out of respect for her and our relationship.
Unfortunately, when my name appeared on a list of speakers at the convention, without the context of the invocation I had been invited to present, the whole matter turned from rabbinic to political, something which was never intended.  Like my father before me, I have never been involved in politics.  Politics divides people.  My life has been devoted to uniting a community – Ahavat Yisrael and ahavat ha-adam.
In the interest of bringing our community together, I have asked to be relieved of my commitment to deliver the invocation.  My request has been honored with the same love and respect in which it was first offered and intended.
May God bless us with a Sabbath of rest, harmony and peace.
Shabbat Shalom,
Very cordially yours,
Rabbi Haskel Lookstein ’47
Principal Emeritus
P.S.  In case you are interested in reading the prayer which I prepared, the text follows.
Invocation
Republican National Convention
July 18, 2016
רבי חנינה סגן הכהנים אומר:
Rabbi Chanina, the Deputy High Priest said:
“הוי מתפלל בשלומה של מלכות”
“Pray for the welfare of the government,
“שאלמלא מוראה איש את רעהו חיים בלעו”
For were it not for respect for it, people would swallow one another alive.”
Eternal God:
We thank you for this blessed nation that for 240 years has translated into reality the Biblical command to “proclaim liberty throughout the land for all the inhabitants thereof.”
We thank you for our constitutional government that has created and fostered the American ideals of democracy, freedom, justice and equality for all, regardless of race, religion or national origin.
Almighty God:  We know that we are living in very dangerous times, when all of these blessings are threatened from without, by forces of terror and unimaginable brutality, and from within, by those who sow the seeds of bigotry, hatred and violence, putting our lives and our way of life at risk.
And so we pray, Dear God:
Help us to form a government which will protect us with sound strategy and steady strength; which will unite us with words of wisdom and acts of compassion; and which will thereby bring peace and harmony, safety and well-being to our beloved America and to all of humankind, and let us all say, Amen.”
Led by “progressives” that had argued for including left-wing J Street in the big tent of Jewish conversation about Israel to avoid the “echo chambers,” the people who signed the petition wanted the rabbi to not acknowledge the other political party in a two-party democracy.  The vocal liberals called the rabbi’s actions a “shanda,” an embarrassment, as they chastised and embarrassed him in public.
Their petition asked for decency, but they showed their rabbi none.

An invitation is an opportunity to welcome another person into the host’s space.  It is an extension of hospitality and warmth and should be treated with care and consideration by both host and guest.

Yet over the past few years, the public has watched politicians act disrespectfully and discourteously with each other, even during moments when a hand is extended.  This has been true of both Democrats and Republicans.

In the heightened emotion of political discourse, civilians have taken note and aped their masters. They shouted down a community leader who was simply acting out of “love and respect” for a member of his congregation.
What is the state of our society, that we have lost the basic ability to treat each other decently?  How can anyone expect an iota of harmony when they burn invitations?

5 thoughts on “On Accepting Invitations, Part 2”