When I watch the marchers in Charlottesville, VA chant “Jews will not replace us,” I see the marches of Nazi Germany in the 1930’s.

When I hear the president of the United States say “you didn’t build that“, I see the words of Adolf Hitler’s Mein Kampf debasing Jews that they are manipulators who profit off the work of others.

When I watch the United Nations pass resolutions with America’s approval, that Jews living in the eastern part of their homeland is illegal, I think of the ghettos limiting where Jews were allowed to live.

When I hear of countries in Europe pushing to ban kosher meat and circumcision, I think of the Greek-Syrian laws in the Jewish holy land 2200 years ago, pressuring to destroy the spirit and religious practices of the Jewish people.

When the world cannot utter a word about Palestinian laws calling for the death penalty for any Arab selling land to a Jew and about the leadership which calls for a Jew-free state, I think of the pogroms throughout the centuries in Russia and Europe, and the concealed mass Jewish graves which fill the forest floors.

When I watch universities in the United States passing resolutions targeting a boycott, divestment and sanction (BDS) of the only Jewish State, I think of the Nazis boycotting Jewish stores. 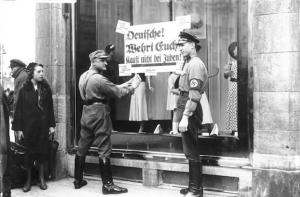 When I watch European and United Nations leaders encouraging Hamas and trying to merge it into a Palestinian unity government, I think of British leader Neville Chamberlain meeting with Hitler in 1938.

When I hear members of the U.S. Congress say that Jews are buying off politicians because they support Israel more than they care about America, I think about leading industrialist Henry Ford republishing the forgery Protocols of the Elders of Zion to foment widespread Jew-hatred.

When I see European countries labeling products made in Israel and Israeli territories, I see Nazis forcing Jews to wear yellow Jewish stars on their clothing.

When I see the United Nations stand by as terrorists use their schools to store and launch rockets into Israel, I think of the U.N. pulling its troops out of the Sinai in 1967 as Israelis dug mass graves in the center of Jerusalem as they prepared to be attacked.

When I read about Jewish groups actively lobbying to dismantle U.S. support for Israel, I think of the zealots of 2,000 years ago who helped destroy the Second Jewish Temple.

When I hear the Democratic candidates for president embrace vile anti-Semites like Linda Sarsour and Louis Farrakhan, I think about the Ku Klux Klan’s David Duke’s run for the presidency.

When I see “intellectuals” addressing the United Nations that Jews are trying to take over the entire “Muslim” Middle East, I am reminded of Christian blood libels.

When I read the leading liberal paper of the United States demonize Israel as racist and deserving of Arab ire, I think about Joseph Goebells and his Nazi propaganda machine.

When I hear the leader of the United Nations say that Palestinian reaction to the occupation is “natural,” I see the five faces of the Fogel family, slaughtered in their sleep.

When I hear the president of the United States call for a member of congress to go back where she came from and then watch as a crowd chants “send her back” to her country which is in shambles, I think of leading White House reporter Helen Thomas telling Jews to “get the hell out of Palestine” to return to the countries which had slaughtered them.

When the United States turns away refugees and asylum seekers, and the press will not discuss the British White Paper which cost over 100,000 European Jews their lives, I note the press’s preference that only certain havens are considered acceptable, and the Jewish homeland isn’t  an appropriate one for Jews.

When I watch 58 members of the United States Congress walk out on the address of the Israeli Prime Minister who was alarmed at the advancement of a deal which would enable a country which had called for its destruction to have a legal pathway to nuclear weapons, I see something frighteningly new: I see the active arming of terrorists with weapons of mass destruction by the Israel’s closest ally.

When I hear the echoes of hatred as loud and as clear as the original voices, I see dead people.

Between Right-Wing and Left-Wing Antisemitism

13 thoughts on “I See Dead People”