This past Sunday witnessed various protests during National Football League games with players refusing to stand for the playing of the national anthem. This article does not address whether the protests have merit or do not. The players actions miss a basic point: people shouldn’t have to pay for your first amendment rights.

Americans have various rights under the first amendment, including to free speech. That right enables individuals who want to stand on a street corner and yell about how much they hate America the freedom to do so.

But the football stadium is not a public street.

People pay hundreds of dollars to enter the stadium to watch a football game, not to watch players express their political opinions. Fans at home also spend lots of money for cable and satellite TV to watch their favorite teams. More specifically – to watch their teams play football.

The only way that a player should have a right to express his feelings about politics is with the approval of the team’s owner and the NFL. Should those governing bodies deem it appropriate to sanction certain behavior, then it becomes part of the game like a black bandage on a jersey in memory of a player. 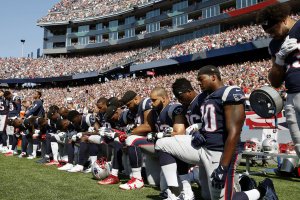 If the NFL and team owners approve the actions of the players expressing their political opinions during the game, then the audience can decide whether they want to spend their time and money watching such activity. But until the league and owners approve the players’ actions, it should be banned or fined.

“To compel a man to furnish funds for the propagation of ideas he disbelieves and abhors is both sinful and tyrannical.”

Even if you agree with the sentiments of the protesters, it is “both sinful and tyrannical” to be forced to pay to propagate such expressions.

The Fault in Our Tent: The Limit of Acceptable Speech

Active and Reactive Provocations: Charlie Hebdo and the Temple Mount