Readers rightfully assume that newspapers go through the effort of educating its readers. As such, the papers should include descriptions and backgrounds of the main actors in any news story.

“Good” actors and “bad” actors are often labelled as such.  For example, readers would imagine that the media would specifically call out a terrorist organization, and almost all of the time, they do. The exception is the terrorist group Hamas.

A group that is often-mentioned in the New York Times lately that is labelled a terrorist group is the P.K.K. The Kurdish group has been fighting for years against Turkey to gain independence and has used violence to achieve its goal. Some people consider the Kurdish aspirations for independence similar to the Palestinians, but there are many differences, such as the fact that the Kurds are actually a distinct people compared to Arabs and Muslims in Syria, Iraq and Turkey where they live, as opposed to Palestinians who are an indistinguishable part of the broader Arab world. The P.K.K. fights alone for the Kurdish people, while the whole Arab world fights for the Palestinian Arabs. Put those facts aside and look at recent reports from the New York Times.

The NY Times is consistent in labelling the P.K.K. a terrorist group.  It may state that the label is attributed to Turkey and other groups such as NATO, the United States or just “widely considered.”  But it usually avoids just stating that Turkey alone considers the group to be a terrorist organization:

Readers of the New York Times are educated by the paper over-and-again that many countries outside of Turkey consider the P.K.K. a terrorist group.  Understanding that designation gives readers specific context with which to consider the story.  A government fighting a terrorist group is logical and appropriate; a defensive action of “the good guys” against the “bad guys”.

Now consider the labeling of Hamas in the New York Times.

Hamas has been labeled a “Foreign Terrorist Organization” by the United States government since 1997. This is not subject to interpretation but is established fact.  It was awarded this designation on the same day as other notable terrorist groups including: Abu Nidal; Hizbullah; Palestine Liberation Front; Palestinian Islamic Jihad; Popular Front for the Liberation of Palestine; PFLP-General Command; and the P.K.K.  It is also consider a terrorist group by the European Union, Canada and other countries.

All of these observations are plain facts for any reader of the Times to see (some examples are listed below, but do your own search of Hamas and the Times and see it for yourself).  These descriptions by the Times are used to transform readers’ mindsets:

From a terrorist group that violently seeks to overthrow a democratic government which must therefore be combatted aggressively with force, to a group that justly uses an armed struggle to achieve modest ends which should be placated. 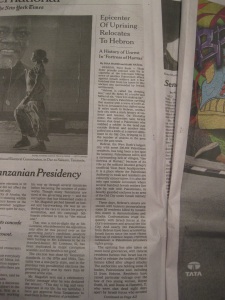 New York Times October 30, 2015 referred to Hebron as the
“‘Fortress of Hamas,’ because of its role as the Islamist group’s
unofficial West Bank headquarters.”

In short, the liberal paper goes through efforts to transform the broadly popular terrorist group that seeks the destruction of Israel and murder of Jews, to a fringe militant religious group that controls a part of the Palestinian population and occasionally resorts to violence against Israel. In such a narrative, who does the Times label as the “good guy” and who is the “bad guy”?  In such a scenario, is the current wave of violence just an “intifada” or “uprising” or part of a broader war to destroy the Jewish State?

Why the Media Ignores Jihadists in Israel