Propaganda has been an important tool in war efforts for centuries. Today, there is a growing consensus to forcefully confront the people and machinery used to promote terror, as much as the effort to eradicate the terrorists themselves.

Nazi Germany exterminated millions of civilians that it considered undesirable before and during World War II. Historians have long considered the reasons that so many Germans and other Europeans turned on their fellow citizens, and attributed some of the rationale to an effective Nazi propaganda machine.

While Adolf Hitler was the leader of the Nazi Party that led the effort to kill Jews, Gypsies and others, it was his propaganda specialist, Joseph Goebbels, who spearheaded the effort to coopt all Germans and other Europeans to despise and turn in those targeted by the Nazis.  Goebbels’ efforts to rally Germans against Jews included actions to make Germans appear as victims after WWI, and to portray Jews as sub-humans that undermined the purity of Aryans. His depictions of Jews in advertisements and film helped deceive the public and sway opinion against the Jews. 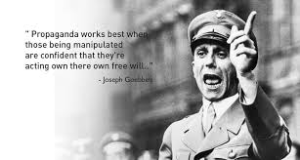 Goebbels never stood trial for his actions, as he committed suicide at the end of the war.

Today, the Islamic State / ISIS is considered the most lethal terrorist organization that kills thousands in the Middle East.  It has made and released many videos showing its barbarity which it uses to recruit soldiers from around the world.

US presidential candidate Hillary Clinton voiced her concern about the terrorist threat from ISIS in several debates, including its online propaganda:

“We also have to do a better job combating ISIS online, where they recruit, where they radicalize. And I don’t think we’re doing as much as we can. We need to work with Silicon Valley. We need to work with our experts in our government. We have got to disrupt, we have got to take them on in the arena of ideas that, unfortunately, pollute and capture the minds of vulnerable people. So we need to wage this war against ISIS from the air, on the ground, and online, in cyberspace.”
September 7, 2016

Those Clinton comments seemed like an online fight: a battle fought on the internet against an online threat.

However, in her comments during the September 26, 2016 debate, Clinton seemed to increase her threat against those involved in making the evil propaganda:

“And I would also do everything possible to take out their leadership. I was involved in a number of efforts to take out Al Qaida leadership when I was secretary of state, including, of course, taking out bin Laden. And I think we need to go after Baghdadi, as well, make that one of our organizing principles. Because we’ve got to defeat ISIS, and we’ve got to do everything we can to disrupt their propaganda efforts online.”

Those comments seemed to convey Clinton’s desire to physically attack those members of ISIS that produce the propaganda. She coupled the assassination of terrorists with the online battle. That was a major ratcheting up of the fight against terrorist propaganda by a politician.

For their part, civilians have taken to the courts to block the spread of terrorist propaganda online.  January 2016 saw a suit against Twitter, and in June 2016, Facebook and Google were also sued for airing ISIS videos.  These online forums had nothing to do with producing or posting the videos, but were attacked for not taking down the propaganda, thereby allowing the evil messages to spread globally. 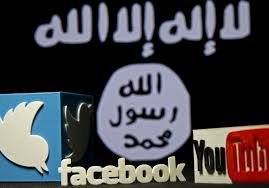 The incitement to violence and terrorism is also found in many places beyond social media and Iraq.

In between the first two presidential debates, Israeli Prime Minister Benjamin Netanyahu addressed the United Nations General Assembly. In his remarks, he noted the disgraceful incitement to terrorism and anti-semitism prevalent in Palestinian Arab society:

“Now here’s the tragedy, because, see, the Palestinians are not only trapped in the past, their leaders are poisoning the future.

I want you to imagine a day in the life of a 13-year-old Palestinian boy, I’ll call him Ali. Ali wakes up before school, he goes to practice with a soccer team named after Dalal Mughrabi, a Palestinian terrorist responsible for the murder of a busload of 37 Israelis. At school, Ali attends an event sponsored by the Palestinian Ministry of Education honoring Baha Alyan, who last year murdered three Israeli civilians. On his walk home, Ali looks up at a towering statue erected just a few weeks ago by the Palestinian Authority to honor Abu Sukar, who detonated a bomb in the center of Jerusalem, killing 15 Israelis.

When Ali gets home, he turns on the TV and sees an interview with a senior Palestinian official, Jibril Rajoub, who says that if he had a nuclear bomb, he’d detonate it over Israel that very day. Ali then turns on the radio and he hears President Abbas’s adviser, Sultan Abu al-Einein, urging Palestinians, here’s a quote, “to slit the throats of Israelis wherever you find them.” Ali checks his Facebook and he sees a recent post by President Abbas’s Fatah Party calling the massacre of 11 Israeli athletes at the Munich Olympics a “heroic act”. On YouTube, Ali watches a clip of President Abbas himself saying, “We welcome every drop of blood spilled in Jerusalem.” Direct quote.

All this is real. It happens every day, all the time. Sadly, Ali represents hundreds of thousands of Palestinian children who are indoctrinated with hate every moment, every hour.

This is child abuse.

Imagine your child undergoing this brainwashing. Imagine what it takes for a young boy or girl to break free out of this culture of hate. Some do but far too many don’t. How can any of us expect young Palestinians to support peace when their leaders poison their minds against peace?” 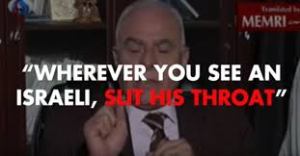 The Palestinian Authority and much of the society is rife with terrorist propaganda.

Did the world listen to Netanyahu’s speech, fact-check his statements and call out the Palestinian Arab vile anti-Semitism and propaganda?

No. It parroted the Palestinian Arab argument about settlements, “The Quartet emphasized its strong opposition to ongoing settlement activity, which is an obstacle to peace, and expressed its grave concern that the acceleration of settlement construction and expansion … (is) steadily eroding the viability of the two-state solution.” Nothing about Arab propaganda being an obstacle to peace.

Hateful propaganda leads directly to violence and terrorism.  Depending where that propaganda is posted, that message can spread like wildfire globally.

In parts of the world, there are leaders that are willing to step up and fight against the poisonous contagion.  Regretfully, not at the United Nations, where its leader, Ban Ki Moon, actively promotes that the terrorist group Hamas should become part of the governing Palestinian Authority.

Perhaps it is time for people to sue the United Nations – just as people are suing  Facebook and Twitter – in giving a platform and pass to Palestinian Arab anti-Semitic propaganda.

21 thoughts on “Stopping the Purveyors of Hateful Propaganda”