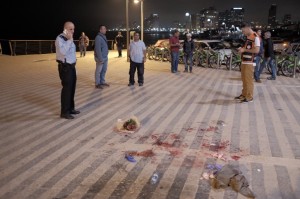 The headlines from major news agencies show a range of focus: some focus on the attacker being a Palestinian, others omit the fact completely; most focused on an American being killed, some papers ignored mentioning the many Israelis injured.

The Palestinian media center inverted the story completely, focusing on the terrorist that was killed.

Focus on American Killed and Israelis Injured by Palestinian

Only American Killed by Palestinian

American Killed and Israelis Injured – But Not by Palestinian

Only American Killed – not by Palestinian

The last two headlines could lead a reader to conclude that Israelis killed the American tourist.

Focus on Palestinians Being Killed

“Israel’s Killing of Four Palestinians Focus of Dailies“ Wafa, the Palestinian News Agency. Wafa led that the local Palestinian papers all focused on Israelis killing Palestinians, placing Israelis as the aggressors as opposed to defending themselves.

News reports are often crafted and biased.  They deliberately add and omit information and highlight certain aspects of stories.

Consider what narrative you read each day.  If you continue to only read from the same news source, your perception of the news will be unbalanced.

For most Americans, that bias has been liberal and anti-Israel, by measuring the circulation of conservative media (Washington Post 400,000; US News <1 million) versus liberal media (USA today 3 million; New York times 1.4 million).

Even in a clear-cut story of a terrorist stabbing a dozen civilians on March 8, 2016, one can see how the media directs a story.  In the more complicated Israeli-Arab conflict, readers are left at the mercy of biased journalists and editors.

Consider getting information from a different political perspective in addition to your favorite media site. Innocent victims of terror deserve more than what the popular USAToday opts to publish.

Educating the New York Times: Hamas is the Muslim Brotherhood

Every Picture Tells a Story: Versions of Reality