On June 2, 2015 the New York Times once again decided to tell the world that the people of Gaza are suffering. 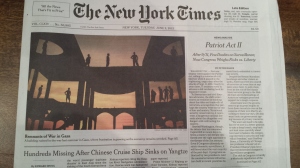 With a large color picture on the front page, the Times included another picture and article inside regarding how the Gazan community has still suffered from a lack of money, jobs and rebuilding of the infrastructure one year after the war “between Hamas and Israel.”  If a reader ever wanted to learn about the scores of people killed in Nigeria, they would have to hunt inside the paper for an article on page A4 (with no picture).  If they wanted to hear about the dozens of Yemeni civilians killed by Saudi Arabia, they would have had to turn to page A12 the day before.  This has been a continuing pattern for the NYT, as outlined in “Every Picture Tells a Story – Whitewashing the World” where the killing of civilians around the world went under-reported, while the suffering of Gazans remained over-reported.

Another trend of the liberal press has been to not label Hamas a terrorist organization, as reviewed in “CNN’s Embrace of Hamas.”  The group simply is a political group dedicated to “resistance.”

The June 2 NYT article “Gazans’ Hopes for Rebuilding After War Give Way to Deeper Despair” has continued to add to the trend of distancing Palestinian Arabs from Hamas, and Hamas from terrorism, as if everything that happened to Gazans was poor luck and happenstance.

The article referred to the Palestinian Arabs’ “hope” and “Early optimism that global powers would intervene forcefully to rebuild the battered coastal enclave after the 50-day summer war between Gaza’s Hamas government and Israel “.  The article never discussed their hope that Hamas would destroy Israel.

The article detailed the blight in Gaza, stating “Pulverized buildings are still scattered along Gaza’s border areas from the last war. In the rubble of Shejaiya, an eastern neighborhood of Gaza City, near the border with Israel,” but did not discuss that the Shejaya neighborhood was the locus of dozens of tunnels from people’s homes into Israel to commit acts of terror.

It would appear that the NYT further wanted its readers to believe that the people of Gaza made a momentary strategic blunder in aligning itself with the Muslim Brotherhood in a “decision that backfired“:

“The Egyptian government, a bitter enemy of its homegrown Islamist party,
the Muslim Brotherhood, has taken extraordinary steps to shut down the tunnels [connecting Egypt and Gaza]  that were the lifeblood of the Gaza economy.

Egypt has opened its border only five times this year, part of a broader policy to punish Hamas, which aligned itself with the Brotherhood, Egypt’s former ruling party,
a decision that backfired when the military seized power in mid-2013.“

This is ridiculous.  Hamas IS an integral part of the Muslim Brotherhood. It didn’t simply “align itself” in “a decision that backfired.”  Here are quotes from the Hamas Charter (1988):

This is not subject to interpretation. Hamas is an integral part of the global Muslim Brotherhood movement, a group which has been actively banned and persecuted in Muslim countries such as Egypt and Syria for promoting terrorism.

However, such facts muddy a narrative of Palestinian Arabs as innocent victims.  Therefore, the media seems to have concluded that the best way to advance the victimhood tale requires a multi-part effort:

If you follow these steps, the Palestinian Arabs can appear as passive victims and not as active participants in a radical anti-Semitic, anti-Western regional movement to install a Muslim caliphate.

Read the press today. Which rules are they using?

12 thoughts on “Educating the New York Times: Hamas is the Muslim Brotherhood”