Every media outlet reported repeatedly about the devastation in Paris in November 2015. The terrorist attacks throughout the city killed 130 people going about their daily lives, and pictures filled newspaper pages of the bloody scene of the Batclan night club where most of the people were murdered. There were many other pictures and articles of the various innocent victims over the following days. 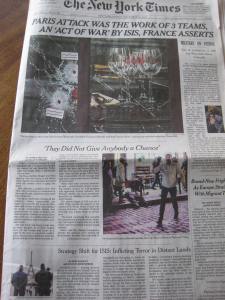 In the following days the headlines of newspapers broadcast that France was attacking ISIS in retaliation for the attacks. Liberal papers like the New York Times editorial section even stated that “France rightfully attacked ISIS.” The papers reported 20 sorties.

Yet, where were the pictures of the dead ISIS fighters?  Where was the headcount of how many fighters were killed?

For all of the coverage about the terrorist attack and follow-up airstrikes, there was virtually no discussion of the deaths inflicted on the ISIS fighters in Syria or Iraq.

The pictures in the paper show the innocent victims of France. Nowhere does it show the images of what the French did in response.

The US Against Al Shabab

On March 8, 2016, the New York Times reported that the US struck and killed 150 fighters in Somalia, belonging to the terrorist group Al Shabab. The United States has been fighting against Al Shabab, an affiliate of Al Qaeda, for a decade.  While this group has not conducted any attacks on US soil against American civilians, a Pentagon spokesperson claimed that the group was planning a “large-scale attack” against US troops.

The US attack was the deadliest attack against Islamic militants in Africa.

There were no pictures in the newspapers to accompany the article.

Hamas has defined itself as opposed to the very existence of Israel.  They refuse to acknowledge any right or legitimacy of the Jewish State.  They repeatedly state in their charter and on their news programs that there can be no peace agreement with Israel, only jihad.

Hamas has launched over 10,000 rockets into Israel, since Israel left Gaza in 2005.  The group has instigated three wars and killed over a thousand Israelis.  Those Hamas wars have claimed thousands of Palestinian Arab lives as well.

However, unlike the invisible terrorists of ISIS and Al Shabab, the papers post the pictures of dead Palestinian terrorists.  Whether covering the front pages of the paper in the summer of 2014, or running long articles with several pictures of Gazans dying using the tunnel network, the paper relays the Palestinians in a sympathetic light.  The people of Gaza, who voted for and are governed by the terrorist group Hamas, are shown as victims time and again.

The United Nations often condemns Israel for “disproportionate” force in stopping Palestinian attackers actively involved in attacking people.  It did not condemn France  nor the United States for its actions against terrorists.

Maybe every day people can begin to condemn the media for disproportionate coverage of Israel’s handling its War on Terror.

Flip-Flopping on the Felling of Terrorist Groups’ Founders

5 thoughts on “Every Picture Tells a Story: The Invisible Killed Terrorists”