The New York Times published an article on October 16, 2015 entitled “Conflicting Accounts of Jerusalem Strife Surround Wounded Boy“.  The article described a 13-year old Palestinian boy who stabbed a 13-year old Israeli boy who was riding a bicycle.  The acting-President of the Palestinian Authority Mahmoud Abbas claimed that the innocent Palestinian was executed by Israelis, while in fact he was recuperating at an Israeli hospital.

Normal logic would suggest that the pictures that accompany the article have something to do with the story.  Indeed, the Times did post a small black-and-white photograph of the 13-year old Palestinian recuperating in a hospital bed.  However, the Times decided to post a much larger photograph on top of that picture – of Israelis with machine guns standing over Palestinian Arab women. 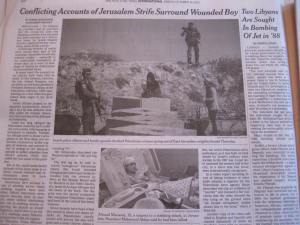 Why didn’t the Times also post a picture of the wounded Israeli boy? Why didn’t it have a picture of Abbas declaring the boy “executed”?  Or Israeli Prime Minister Benjamin Netanyahu pointing out the lies and incitement of Abbas? Because for this “progressive” newspaper, the real story about Arabs attacking innocent Israelis is about Israelis fighting Palestinians, not the other way around.

The Times wrote a piece about “conflicting versions of reality” between Israelis and Palestinians. The reality of the Times constant portrayal of Israelis “occupying” Palestinian victims is another disturbing story in the “conflicting” (read “false”) narratives that fan the flames in the region.

12 thoughts on “Every Picture Tells a Story: Versions of Reality”