In an Instagram and Twitter world, people expect their news in small tidbits. The major media sources have understood this and not only have taken to social media, but have their news stories include more pictures than they had previously. A review of their selection of pictures and captions provides an interesting snapshot of their views of the news.

Over a two week period in June/July 2015, seven major unprovoked attacks on Israeli Jews were committed by Palestinian Arabs. The Washington Post captured the anguish of the attacks with a picture of a grieving family which included a caption “Relatives of Malachi Moshe Rosenfeld, an Israeli settler who died in a car shooting attack on Tuesday near a Jewish settlement in the Israeli-occupied West Bank, cry during his funeral.”

On June 27, the NYTimes made a small post without a picture in the World Briefing section in a blurb called “Man is Shot in West Bank After Opening Fire on Soldiers”. (journalist: Diaa Hadid)

These two attacks on Israeli Jews were completely invisible to a casual reader.

Another World Briefing report on June 24 without picture had a headline “Gazans Denied Access to Mosque.” (Diaa Hadid)

On June 30, the NYTimes ran a larger article, also without a picture entitled “Worried that a Fasting Palestinian Prisoner Could Die, Israel Releases Him.” While there was no picture, the bold headline might have caught someone’s attention. The details in the article that the Palestinian prisoner was the spokesman for the terrorist group Islamic Jihad certainly would not have been recorded. (by Diaa Hadid)

Here are stories that the Times emphasized with pictures with their own terse storyline captions.

On June 29 the paper had an article which included a small map. The heading was “Israel plans Fence for part of Jordan Border.” (Diaa Hadid and Rick Gladstone)

On June 26, the Times included a small color photograph under an article called “Palestinians Deliver Accusations of Israeli War Crimes to International Criminal Court.” The picture of a group of people had a caption “Riad al-Malki, the Palestinian foreign minister, center, and delegation members on Thursday after submitting what they called evidence of Israeli war crimes to the court in The Hague.” (by Marlise Simmons)

On June 25, the Times posted two large black and white photographs as part of an article “Years after Massacre, a West Bank ‘Ghost Town’ Stirs.” The large picture was of Israeli soldiers walking past a store, while the smaller picture was of a man opening his store before four children. The single caption read “Israeli soldiers patrolling al-Sahla Street passed a reopened granary. Below, children watched as Mohammed Abu Halaweh briefly unlocked his butcher shop.” (by Jodi Roduren)

On July 4, The Times again posted two large black and white pictures alongside an article called “Palestinian, 17, is Killed by Forces from Israel.” The large photograph was of Palestinian women mourning with a caption “Relatives mourned the death on Friday of Muhammad Hani al-Kasba, a 17-year-old Palestinian. He was killed by Israeli forces in the occupied West Bank.” The smaller picture was of an Israeli soldier behind a barricade with two people walking before him. The caption read “Hours after Mr. Kasba was fatally shot, an Israeli soldier stood guard on Friday as Palestinians waited to cross to Jerusalem via the Qalandia checkpoint in the West Bank.” (Isabel Kershner) 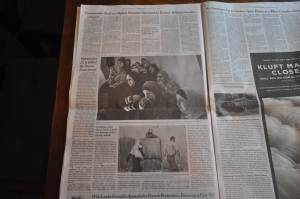 There was one news story which had two color pictures, albeit smaller than the two stories above. On June 28, the paper ran an article “Youth Chorus Unites Israelis and Palestinians, at Least for a Few Hours.” The two pictures were of a group of young men and women clapping and laughing. The caption read “Members of the Jerusalem Youth Chorus, above, took a break from rehearsing this month for their first United States tour. Micah Hendler, right, a Maryland native, founded the group.” (by Isabel Kershner)

The balance in the stories overall and in individual news reports was completely lacking in the New York Times.

First, consider the pictures and the stories they told: the Palestinians were dignitaries and everyday people going about life or mourning a death. They had names and professions. However, every Israeli that was pictured was a soldier and nameless. Even more, they were accused of war crimes.

Second, think of the seven attacks on Israelis Jews. They were treated as non-events and received no pictures or mention in the captions. The casual reader would not even know that such attacks occurred.

Third, review a specific story: The July 4 headline, pictures and caption would lead a reader to think that Israeli soldiers simply opened fire on a youth and that soldiers continue to patrol the intimidate the Arab population. The complete news report was that the Arab that was killed initiated an attack by hurling stones at Israeli vehicles, smashed the windows. It was in response to the Arab attack that soldiers got out of their vehicles and shot him. There were many pictures of the smashed car available that the Times could have posted as the second picture to show the complete story of the incident. Instead, it opted to convey a one-sided narrative of Palestinian Arabs as passive victims and Israelis as military oppressors.

The pictures and captions in the New York Times tell a specific narrative time after time after time: the Palestinian Arabs are passive victims under the oppression of the Israeli military. It is only these poor Arabs that suffer – unprovoked. Ordinary Israelis are not stoned, stabbed and murdered and are not subject to attacks by Palestinian Arabs. More, if there is any chance for peace in the region, it will come from Americans who will bring peace to the region.

Every Picture Tells a Story, Don’t It?

Every Picture Tells a Story, the Bibi Monster

17 thoughts on “Every Picture Tells a Story: The Invisible Murdered Israelis”