Summary: The media frequently touches on the suffering that takes place in Gaza. Yet, the depth of their coverage of Arab misery never approaches any level of analysis on the root cause for the Israeli-Arab conflict.

The Atlantic published an article on May 2, 2015 called “Gaza is Hell” (all in quotes) which described the miserable living conditions of Arabs living in Gaza. The 2000-word article covered the area and quoted the residents, but never scratched the surface of the underlying cause of the residents’ misery. 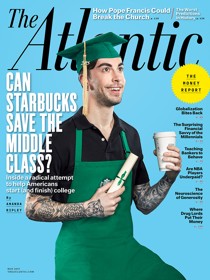 The Atlantic magazine,
May 2015

The problem in the coverage was in five key areas, long ignored by the media and politicians.

The Atlantic article did not fall victim to a sixth category, which is actually a subset of lie #5: Hamas is the democratically-elected choice of Palestinian Arabs.

Hamas’ mission is very clear for any literate individual: the complete destruction of Israel. It lays out its goal repeatedly in its 1988 Charter, the most antisemitic charter of any governing body in the world, including the Nazi party when it took power in 1933.

For those who cannot read (former US President Jimmy Carter?) there are dozens of recent videos from Hamas officials which call for the murder of Jews and destruction of Israel.

Yet, The Atlantic echoes soft lies in its piece stating that “Hamas’s rhetoric is all about resistance,” and “Hamas advocates militant resistance to Israel.” Nope. Resistance means opposing a force. Hamas is the force that seeks jihad and the total destruction of Israel. Any statement that says that Hamas is a resistance movement, inherently makes the argument that the basic existence of the State of Israel is an active force against Palestinians.

The mutant siblings of lie #1 that Gazans are “resisting” Israel, are lie #2, that Palestinians have always been self-governing in a country of their own, and lie #3, that Gazans just want to live in peace alongside Israel but Israel continues to attack it.

Alice Su, the author of The Atlantic article is based in Jordan, a country that is over 50% Palestinian Arab. That country, like Gaza, was part of the 1922 British Mandate from the League of Nations. Before the British ruled Gaza, the Ottoman Turks were in charge, and after the British came the Egyptians. None of these rulers made it into Su’s description which starts a historical background of Gaza in 1967: “Gaza, which was under Israeli occupation from 1967 until 2005”. With some additional background, it would have been clear to any reader that Gaza was never ruled by local Arabs (the Ottomans were Muslims but not Arabs), and it has only been since Israel left the territory in 2005 that Gazans have ruled over themselves.

Additionally, the various wars that Israel fought against the Arabs including 1948 and 1967 were defensive wars against several Arab countries (including the Arabs in Gaza). The more recent wars from Gaza were also defensive, in response to Hamas’s rocket attacks, terror tunnels and abduction and murder of Israeli teenagers. Yet Su stated that “Israel has also launched three military operations in Gaza since the Hamas takeover,” which suggested that Israel was the aggressor, which it was not.

Arab amnesia repeats itself today, as Su writes about a Gazan: “They keep asking him why the Israelis bombed them. “I tell them, ‘Naseeb. This is our fate,’”  The Gazan assumed a completely passive stance in the conflict and Su did not educate the reader about: the abduction and murder of three Israeli teenagers; the rockets fired from Gaza into Israel; and the terror tunnels Hamas dug into Israel to kidnap Israelis.

It was only eight paragraphs later that Su brought up the tunnels: “Israel has restricted imports of key building materials like cement and steel, out of concern that they’ll be used to build tunnels and facilitate terrorist activity.”  Such concern looks out-of-place without any history regarding the Hamas tunnels which were used for terrorist activities.  The Israeli ground invasion into Gaza in 2014 was specifically to destroy those tunnels.

To underscore the point of misdirecting the reader, consider the title of the Atlantic article.  It comes from a resident of Gaza. ““Gaza is hell,” 20-year-old Ahmad told me in Shejaiya, one of the worst-hit neighborhoods in Gaza City.”

Shejaiya was the neighborhood with the greatest number of terror tunnels, many coming straight from people’s homes. That is why the Israelis concentrated its efforts on the neighborhood in a defensive action.

Why did The Atlantic run an article with a headline quote from a man who was part of the terrorist infrastructure?  Why did it deliberately mislead readers into thinking these people were merely passive homeowners who were bombed indiscriminately by Israel?

REFUGEES IN THEIR HOME

Su’s article describes refugees and refugee camps in Gaza. Now that Gaza is not occupied by Israel, Egypt, the British or anyone else, these people cannot be considered “refugees” since these “Palestinian Arabs” are living in “Palestine” run by themselves.

The refugee myth has continued to compound itself as this misnomer is incorrect on additional levels.  Refugee status cannot be handed down like inheritance through the generations.  Refugees can only be from a country, not a house or region.

At the most generous, these people can be considered descendants of “internally displaced” people from the region of Palestine which was occupied for centuries until 2005. Yet Su used the term refugee several times:

“a refugee camp initially built to shelter 9,000 out of the 750,000 Palestinians who became refugees when Israel was established in 1948. More than half a century later, the camp hosts more than 21,000 refugees,”

The description above elegantly covers many soft lies: the ones mentioned above, and that Arabs became refugees when they actively launched a war to destroy Israel; they were not passive “when Israel was established in 1948.”

Su did get several things right, such as “Gaza remains in ruins.” But why?

Su pointed out that “Hamas, the Islamic militant group that governs Gaza… since the organization defeated the PLO-affiliated Fatah party in Palestinian elections in 2006.” Hamas was chosen by the Palestinians in 2006 and polls continue to show Palestinians favoring Hamas should elections ever be held again. The various quotes of Arabs on the street in Su’s article affirm that view: “Another college student said she’d lost faith in politics, but would vote for Hamas if an election were held now.”

Yet Su would have you believe that Gazans are simply passive victims in the situation. That position is encapsulated in her article: “Those who survived last summer’s war are trapped in 360 square kilometers of trauma and contradiction, choking on war and blockade, disillusioned with the Palestinian leadership and disempowered by the aid community. They sit without jobs, relief, or means of rebuilding, waiting for things to change.” Untrue.

The catalyst for war is Hamas.

The simple cause-and-effect of the situation in Gaza is about the people’s support of a genocidal anti-Semitic regime.  But writing about such reality would make it harder to sympathize with the picture laid before readers in The Atlantic.

Scarier still, is the support for the insidious paring: Hamas with a nuclear Iran. That is what keeps the hopes of Gazans alive under the shade of complicit countries and malevolent media.

18 thoughts on “Cause and Effect: Making Gaza”