The United Nations is gathering this week for a summit in New York to discuss ways of helping refugees and migrants.  The various roundtables will review the difficult situation facing millions of people due to a number of wars, principally in the MENA region (Middle East and North Africa) as well as in Afghanistan.

The UN will then ask for countries of the world – principally the United States and Canada – to contribute money and homes to settle these refugees.

There are three principle flaws with the UN approach:

The UN Wastes the World’s Money on Non-Refugees

The United Nations currently spends billions of dollars that are earmarked for refugees, to people that are NOT refugees.

As described in “Help Refugees: Shut the UNRWA and Fund the UNHCR,” the United Nations created the UN High Commissioner for Refugees (UNHCR) and tasked it with helping millions of people from around the globe who are fleeing conflict.  The UNHCR helps these refugees find safety in new countries and establishes some infrastructure (temporary homes, hospitals and schools), far from their homes, where they have little support.

However, the UN also created a distinct agency, the United Nations Relief and Works Agency for Palestine Refugees (UNRWA) just for a single group of people – Palestinian Arabs. These Arabs are NOT refugees, but descendants of people who fled their homes and settled a few miles away in the exact same region. Refugee status does not pass down through the generations, and has absolutely nothing to do with people leaving a certain house to a location nearby.

Despite this, the UN has a larger staff and spends significantly more money on these non-refugees.

As the world is facing a true refugee problem, with actual refugees fleeing harm to find protection in lands where they know no one and have no infrastructure at all, it is well past time to shut down the farce of UNRWA which exists solely to perpetuate the Arab-Israeli Conflict, and devote those resources to actual refugees.

Muslim World Must Take in Refugees

The European Union is pushing the US and Canada to accept more refugees, particularly those fleeing the civil war in Syria. The EU argues that it has already accepted the lion’s share of the refugees, and many Europeans have become uneasy with the large influx of foreigners.

But the 57 Islamic states will vote at the UN to make the non-Islamic countries take in the refugees, to an unfamiliar environment. Why are so many Muslim countries only making refugees and not helping them? Why does the world enable the situation?

Stop the Flow of Refugees

The biggest causes of the refugee crisis is the civil war in Syria and the growth of ISIS in Iraq. Trailing these are the wars in Afghanistan and Libya, the civil war in Yemen, and the failed state of South Sudan.  These are problems that erupted and spread under the hands-off approach of the Obama administration in the Middle East, and its active involvement in Afghanistan.

The ramifications have spread to the entire world.

Obama did little to nothing when Syria’s President Assad dropped barrel bombs and chemical weapons on his own people. Obama vacated Iraq to allow a vacuum to be filled by ISIS.  After Secretary of State Hillary Clinton toppled the regime in Libya, the US left the country in shambles.  Those decisions allowed terrorists to penetrate Europe.

It is time to reverse that inaction.

ISIS must be defeated and the US must remain in Iraq to help the country stabilize.   Active involvement in Libya must happen immediately, before Libya becomes another Iraq.

The only country that has become more powerful under Obama is the state sponsor of terrorism, Iran.

The implementation of Obama’s poor decisions must stop, and refugees should be encouraged to return to their countries as soon as practical.

Over September 19 and 20, the world will witness the dictatorships and human rights abusing-countries dictate to the western world that the West must take responsibility for the failed Islamic states.  The perpetrators will claim victim status, and insist that Europe and North America must both pay for the MENA refugees and shelter them, while the Muslim world itself does nothing.

Well, in fairness, the Muslim world won’t do nothing; it will dictate its demands.

One of the speakers at the summit will be the Palestinian Authority Prime Minister Rami Hamdallah.  Hamdallah is well known to viewers of Palwatch and MEMRI for calling on the Islamic world to attack Israel for chasing the Muslim agitators who curse and throw stones at non-Muslims visitors to the Jewish Temple Mount.  He often asserts that Israel is “Judaizing” their holy city of Jerusalem.  Most significantly, he actively promotes the families of terrorists killed while attacking Jews, ensuring that they receive monies from global agencies.

Yes, that’s illegal, but Hamdallah gets diplomatic immunity while visiting NY.  What a great choice for a speaker!

Another speaker is Pierre Krähenbühl, the Commissioner General of UNRWA, the agency that has waged a multi-decade war against the only democracy in the Middle East. Krähenbühl ignores the role that UNRWA played in storing weapons for Hamas, the terrorist group that runs Gaza.  He focuses on asking the world for yet more money for the non-refugees that live in a land that they already control in Gaza! 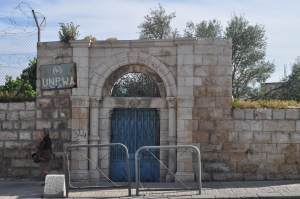 While listening to the sad state of refugees, sympathize with their plight, but don’t be fooled by the UN’s recommended courses of action.  Stop the UN farce of perpetuating conflicts and wasting the world’s money, while never demanding accountability from the Islamic countries and entities.

A Logical Approach to Immigration from Personal History

9 thoughts on “UN Summit for Refugees and Migrants September 2016”