In the immediate aftermath of the antisemitic massacre of Jews in Pittsburgh in October 2018, CNN went through an effort to explain to its audience the nature of hatred. In truth, it just revealed the nature of its own biases.

Don Lemon, a ubiquitous talking head for CNN made the following comment in an exchange with Chris Cuomo, another anchor:

Let’s put aside the racist comment on its face for a moment, something that could have emerged from the mouth of Louis Farrakhan. Let’s simply examine the data as compiled every year by the FBI regarding hate crimes in the USA. 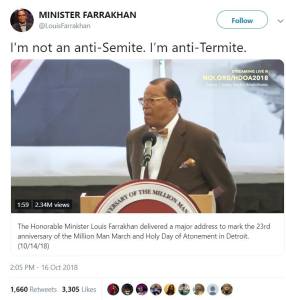 Hate Crimes Against a Person, 2016

According to the FBI, 2,197 white people in America committed a hate crime and 1,117 black people committed a hate crime, almost twice the number of attacks. However, when accounting for the size of each group, the numbers conclude that an average black person was three times more likely to commit a hateful attack against a person than a white person (one hate crime attack for every 38,000 black people and one attack for every 113,000 white people).

Overall, violent crime in the United States has been in a decline for over a decade according to the FBI. The exceptions were spikes in violent crime in 2012, 2015 and 2016. This would seemingly undermine the accusation that Donald Trump is the reason for more violence in America, as violent crime actually declined in 2017.

Change in Number of Violent Crimes

As it relates, to Jews, many of the alt-left progressive wing have charged that Jews are part of the white privileged class. The likes of Linda Sarsour and Melissa Harris-Perry defend Louis Farrakhan’s antisemitism because they don’t believe that Farrakhan has any power or influence so his comments are therefore innocuous against a privileged group of Jews.

But the facts tell a different story.

Jews are clearly not experiencing America like most white Americans.

Coming back to the initial charge of Don Lemon about white men being terrorists on the back of the antisemitic massacre in Pittsburgh, it is useful to look at the perpetrators of antisemitic crimes through the years.

Antisemitic Attacks by Race of Attacker

The table above is compiled from several FBI reports about hate crimes through the years. A few trends are important to review:

To summarize, the number of antisemitic attacks has indeed been increasing, but more and more of the attacks are coming from blacks, not whites. That is also true generally about all hate attacks, that black people are much more likely to be the assailant. Lastly, violent crimes against Jews have definitely spiked since 2015, (perhaps correlated with Donald Trump’s run for the presidency), but overall, hate crimes have not.

The progressive media has been hiring greater numbers of minorities who harbor anti-white attitudes. Don Lemon’s comments are not unique.

The New York Times hired a noted racist Sarah Jeong who has proudly posted tweets “White men are bullshit,” “#CancelWhitePeople,” “white people marking up the internet with their opinions like dogs pissing on fire hydrants” and “Oh man it’s kind of sick how much joy I get out of being cruel to old white men.” The New York Times was unperturbed. It claimed she was just mimicking the attacks against her and she apologized.

Marc Lamont Hill, another commentator on CNN often makes disparaging comments about Israel (saying that the country has no right to exist). Hill, Lemon, Sarsour and others are all part of a left-wing movement which believes that racism can only exist when it is coupled with institutional power. Therefore, any minority – especially those that are under-represented in positions of power like blacks and Muslims in the United States – cannot be considered racist. As the minority, they stand in the position of the oppressed. Any violent actions which they commit are simply “punching up,” trying to level the unfair playing field, which is a primary goal of progressives.

The pairing of the argument that no black person can be racist, is that all white people benefit from white privilege and inherently take advantage of a racist American society. For blacks and Muslims which view Jews as whites – and very powerful ones at that, controlling the banks and media – Jews can never be truly seen as victims.

So Jews are murdered. Again. The neo-Nazis are taking aim at Jews. Again.

And now, for the first time, blacks in America are broadly taking aim at Jews as well, with the smug support of alt-left progressives.

Between Right-Wing and Left-Wing Antisemitism

What Kind of Hate Kills?

NY Times, NY Times, What Do You See? It Sees Rich White Males

When Only Republicans Trust the Police

In the Shadow of the Holocaust, The New York Times Fails to Flag Muslim Anti-Semitism

15 thoughts on “Don Lemon, Here are Some Uncomfortable Facts about Hate Crimes in America”