The fires around Israel have been burning for weeks, a direct result of the hundreds of arson attacks launched by Palestinian Arab terrorists in Gaza. And the United Nations has been silent. 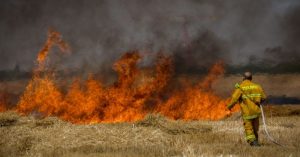 Well, not exactly. The United Nations Special Coordinator for the Middle East Peace Process, Nickolay Mladenov made remarks in Gaza on July 15, 2018. In those remarks, he spoke about the situation from the Palestinian perspective. He spoke about the “humanitarian, political and security” situation of the people in Gaza, but not in Israel. The most telling indication of how Mladenov viewed the situation could perhaps be captured by this remark:

For the United Nations’ point person on the “Middle East Peace Process,” only the Palestinians lived through three wars, not the Israelis. The Israelis only had the “threat of rocket attacks,” not actual rocket attacks. Not abductions and infiltrations by underground tunnels. Not arson attacks through the air.

It is not as though the UN doesn’t understand the dangers of arson. It has loudly spoken up about it – in the few cases when Israelis engaged in such attacks.

In July 2015, the UN loudly condemned Israelis. The Secretary General said at the time:

“The Secretary-General strongly condemns today’s murder of a Palestinian child in the West Bank and calls for the perpetrators of this terrorist act to be promptly brought to justice. He expresses his deepest condolences to the family of Ali Dawabsha, who were themselves severely injured in the arson attack. Continued failures to effectively address impunity for repeated acts of settler violence have led to another horrific incident involving the death of an innocent life.  This must end.”

The UN would say the same about another attack in March 2016:

“I strongly condemn today’s arson attack by suspected Jewish extremists on the home of Palestinian Ibrahim Dawabsheh in the occupied West Bank village of Duma. Mr. Dawabsheh and his wife were at home during the attack and sustained light injuries as a result of smoke inhalation. I wish them both a full and speedy recovery.”

But when it comes to Israel, the UN cannot acknowledge the HUNDREDS of arson attacks by HUNDREDS of Palestinian Arabs.

Similarly, the UN will never call out “Muslim extremists,” even while it comfortably condemns so-called “Jewish extremists,” despite passing resolutions that specifically denounce calling out extremists by their religious identity.

The UN will also not call the Palestinians’ attacks “terrorist acts” as it does for Israelis. It actually does the exact opposite. It celebrates the Palestinians. It calls the arsonists allies as it stands with the people of Gaza:

“Our allies in this are the Palestinian people in Gaza themselves. Our partners are in the Palestinian government and everybody who wants to see an end to this current escalation.”

“I assure you that the UN will not leave Gaza. We will enhance our presence here to be more effective and more efficient in providing support to the Palestinian people.”

There is ZERO concern for Israelis suffering from arson. Israel is simply a counter-party with whom the UN negotiates on behalf of the Palestinian Arabs:

“We will continue working with the Israeli authorities to improve access and movement for Gaza and to allow for more imports and exports. Without an economy, another escalation can come very quickly.”

For several decades, the United Nations has contorted itself with new and unique definitions for “refugees” just for Palestinian Arabs. It continues to turn a blind eye to the evils of Hamas which it seeks to legitimize by ushering it into a coalition government, as well as ignoring the actions of other Palestinian arsonists.

The Secretary General of the UN Antonio Guterres said “The international community has the legal right and the moral duty to act collectively to put an end to terrorism ‘in all its forms and manifestations, committed by whomever, wherever and for whatever purposes.’” If only the UN would live up to its own values with it comes to Palestinian Arab terrorists.

The UN Must Pay to Repair the Gaza Fence

Reviewing the Rhetoric of Palestinian Arabs and Israelis
The United Nations’ Incitement to Violence
The UN Does Not Want Palestinian Terrorists to be Held Accountable
The UN Wants “Real Stories on REAL Refugees”The United Nations Once Again “Encourages” HamasSubscribe YouTube channel: FirstOneThrough