The United Nations Special Coordinator for the Middle East Peace Process, Nickolay Mladenov, gave the UN Security Council a briefing on February 20, 2019. It included the following two sentences to conclude his introductory remarks:

“An international community that understands that the weaker party – the Palestinian people who have lived under occupation for more than fifty years – need our support more than ever.

The concluding comment is one that seemingly people on all sides of the conflict could support – establishing a framework that is both pro-Israel and pro-Palestinian; a scenario in which all of the parties are supported. 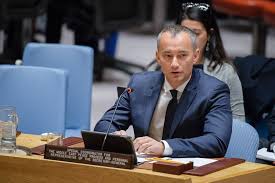 But the immediately preceding comment makes clear that the aim of the UN is NOT to support both parties, but only “the weaker party – the Palestinian people.”

This sentiment rallies the alt-left, that the weaker party is always the one to be embraced, regardless of whether it is moral or ethical. Progressives therefore embrace such toxic notions that the Palestinian Authority is right to pay the families of Arab murderers of Israeli Jews, because the families of those murderers are poor and stateless. The evil is rationalized, normalized.

For the alt-left, it is an appalling blessing of murder. For the United Nations, it continues a long history of virulent anti-Zionist behavior.

The Liberals in Canada are Following Obama in Turning on Israel

The Hollowness of the United Nations’ “All”

The United Nations’ Select Concern for Arson in the Middle East

3 thoughts on “The United Nations Oxymoronic Care for Israel”