On January 26, 2017, the United Nations Alliance of Civilizations (UNAOC) co-sponsored an event with the EU on the impact of the media in telling the stories of refugees. The High Representative of UNAOC Nassir Abdulaziz Al-Nasser noted that while there was “solidarity towards refugees, we also witnessed a surge of xenophobic hate speech.” The symposium sought ways to change the negative perception that many people have about immigrants to combat growing xenophobia and distrust of “the other.” 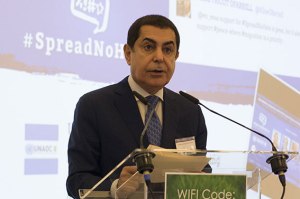 “But we will do our utmost to tell the real stories of refugees, in order to protect communities’ interests and safeguard the rights of each individual. I think a balance must be found that protects the freedom of expression as well as the rights of migrants as human beings with human rights,”

What an interesting turn of events for the United Nations. The UN wanted to combat hate speech on social media from the people that did not want refugees, by sharing real stories of the refugees, in the hope that the humanity of the people and situation would cause the populace to not fear the stranger and incorporate them into society.

This is the exact OPPOSITE of what the United Nations has done for decades regarding Palestinian Arabs.

The United Nations AOC is moving in a positive direction in calling for peace and co-existence. The action further highlights the illegitimacy of the stale evil farse that is UNRWA that spreads “negative narratives” about Israel.

5 thoughts on “The UN Wants “Real Stories on REAL Refugees””