The New York Times berated Israeli Prime Minister Benjamin Netanyahu for tying Palestinians to the Holocaust in its editorial pages on October 23, 2015 “Mr. Netanyahu’s Holocaust Blunder.”  It is interesting for the Times to be so angry about this remark while failing to note certain current truths about the Palestinians and the Holocaust:

The Palestinians are the most anti-Semitic people in the world, with almost every person (93%) holding negative feelings about Jews according to a May 2014 poll.  By almost every measure, the Palestinians today are more extreme than Germans were in 1933, whether in passing laws that forbid Jews entry onto Palestinian college campuses; laws that prevent land sales to Jews; or the stated desire to have a country free of any Jews.  Shouldn’t that be the main focus of the Times?  Why does it perpetually give a pass to the vile anti-Semitism and trivialization of the Holocaust by the Palestinians, but immediately attack of Netanyahu?

The Times stated that Netanyahu attempted “to distort history in order to draw a straight line between Mr. Husseini’s Nazi views and the current Palestinian leadership.”  Netanyahu didn’t need to do that. Palestinians do that themselves. 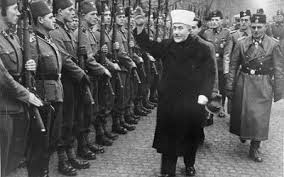 29 thoughts on “Palestinians of Today and the Holocaust”