On September 14, 2015, State Department Spokesperson John Kirby gave a daily press briefing in which he said: “The United States is deeply concerned by the recent violence and escalating tensions surrounding the Haram Al-Sharif/Temple Mount. We strongly condemn all acts of violence. It is absolutely critical that all sides exercise restraint, refrain from provocative actions and rhetoric, and preserve unchanged the historic status quo on the Haram Al-Sharif/Temple Mount in word and in practice.”

The comment came after a clash between Arab rock throwers and Israeli police on Rosh Hashanah, the Jewish New Year, as Arabs sought to prevent Jews from visiting the site. 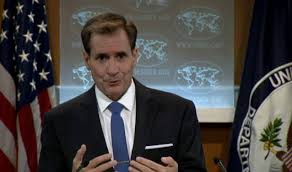 The “status quo” that the State Department presumably sought to maintain was the ban on Jewish prayer on the entire 35 acre Temple Mount platform, the Jews’ holiest place on earth.  That ban was put in place by Muslims in the middle of the 16th century, and Israel has allowed the Islamic Waqf to maintain the ban, even after it captured the Old City from Jordan and reunified the city in 1967.

Later in this same briefing, Kirby responded to a question as to whether the Oslo Agreement between the Israelis and Palestinians should be scrapped since no Palestinian state was on the horizon: “Secretary Kerry is committed to pursuing a two-state solution, and I think you’re going to see him continue to do that throughout his tenure here at the department. I don’t think anybody’s – certainly not here – willing to give up on that ultimate goal.”

Kerry is “committed” to changing current reality and creating an Arab-led sovereign state in the holy land for the first time in history.

What makes one status quo worth keeping while the other is not? Does the State Department only endorse a status quo which Muslims desire (banning Jews from the Temple Mount) even though it is clearly anti-Semitic? Is it less a matter of favoring Muslim demands over American integrity and principle, but rather a function of seeking the support of 57 Arab countries versus a single Jewish State?

A more proper – and consistent – response would have been that Israel and the Jordanians and Palestinian Arabs will determine any changes to the status of Jerusalem and the holy sites as part of a final peace agreement. Those changes to the status quo will include matters of sovereignty and rights of access and prayer.