Over the past decades, the literary world has seen the introduction of a new specialized category of books enter the mainstream and become very popular: do-it-yourself books, or DIY for short.  Books like the “…For Dummies” have been written on a wide range of topics, ranging from auto repair, to football, to computer programming. People believed that they could understand – or at least become proficient at a subject – by reading a book by someone they never heard of or knew.

Yet people purchased the books without knowledge of the author for a few reasons: 1) they obviously wanted to learn the material, and wanted an easy to understand tutorial;  2) they knew the brand covered lot of topics and was widely popular; and 3) they may have heard good reviews from a friend. One would imagine that  if the people heard bad reviews or knew that the author was a failure, no one would touch the books.

Is this formulation true in politics? If people want to learn something from a former politician, would they care if the person was a failure? If no one they respect likes the politician’s opinion would they listen? Or would the brand of their position (their title) hold enough clout that they would pay any attention to what that person had to say? 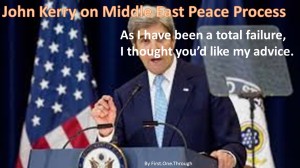 US Secretary of State John Kerry traveled the world for the last four years with a fantastic brand: the global diplomat for the most powerful country in the world and a leading democracy. His credentials opened doors in every part of the globe, as countries sought to trade with US, or to obtain US protection and aid.

But Kerry’s impact on the Middle East was terrible.  The eight years of the Obama administration watched the region spiral into killing fields and a race for nuclear weapons. One of the results for the failures in word and deed has been the worst refugee crisis in generations, with millions of Muslims and Arabs fleeing into the western world.

Americans noted the failed foreign policy (and domestic too), and voted out any continuation of Obama’s policies.

So as he was leaving office, Obama doubled down on his failure. He gave tacit approval to a UN Security Council resolution condemening Israelis living across an invisible line as “illegal,” and then his Secretary of Defense John Kerry condemned Israel in a long speech.  Presumably the speech was for Israelis and Palestinian Arab consumption, as well as their leadership. It was likely intended for in the incoming Trump administration as well.

The issue for all of these consumers is that the authors are confirmed failures.  The Obama administration could not get the Palestinian Authoity to even engage seriously with Israel. Instead, the PA sought unilateral action at the United Nations to become a state. It was rewarded by the Obama administration with another UN victory, but no movement towards peace.

With such a tarnished image, and a step from retirement, why would Israelis or their leadership pay heed to the actions and comments of Obama and Kerry?  Have any of their supporters “bought the book” and think there are pearls of wisdom to be found?

Only the left-wing fringe group, J Street, that has long pushed the Obama administration to condemn Israel at the United Nations, applauded the UN resolution and Kerry’s speech. In language that masked the far flung liberal mindset of the group, it stated that such a move was “bipartisan” in the hope of swinging would-be “pro-Israel, pro-peace” consumers to ingest the bile.

John Kerry spoke to the world about the centrality of Israel’s security to any peace agreement, even after a history of the State Department giving only scant lip service to Israel’s need to fight terrorism, while the US enabled Iran to keep its entire nuclear weapons infrastructure. Kerry said that “friendships require mutual repect.” Is that why Obama snubbed Israel by turning down an invitation to speak to the Knesset and opted to address Israeli students – long before Netanyahu came to address Congress in 2015?

Neither the Israeli people nor Israeli leadership was listening to Kerry. The Trump administration made clear that they think the Obama/ Kerry policies were total failures. The major pro-Israel groups came out against the UN vote and Kerry’s speech, and went on to educate the broader pro-Israel community that the remarks were disgraceful, and the approach unacceptable.

Which leaves a person to wonder who Kerry was actually addressing.

The reality was that the speech was not meant as a call to action for Israel or the incoming Trump administration to move the region towards peace.  Kerry was addressing the Arab world and telling them they were right all along. Kerry followed a long list of Democrats seeking a lavish life in retirement, like Jimmy Carter, the Clinton Foundation and Al Gore.

Kerry used the western world as a vehicle to show his devotion to the Palestinian cause. He treated the Israelis as mere tools so that he can enjoy the splendors of the Arab world.

For those that seek actual peace in the Middle East, the declaration and observations of a failure should be treated in the manner it deserves.

Select Support in Fighting Terrorism from the US State Department

US State Department Comments on Terrorism in Israel and the Territories

9 thoughts on “John Kerry: The Declaration and Observations of a Failure”