On June 30, 2016, the spokesperson for the US Secretary of State, John Kirby gave his daily press briefing. He opened with a story about the terrorist attack against a young Israeli girl who was killed in her bed. Kirby appropriately described the “brutal act of terrorism,” however, his subsequent remarks went in a strange direction. 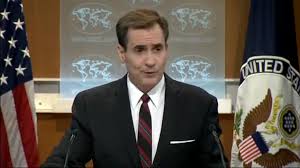 Spokesperson for the US Secretary of State, John Kirby

Consider which of these statements Kirby made on June 30 about terrorism:

Those are strong comments of support for the government. They are determined calls to fight against terrorism.

Unfortunately, the US Department of State did not make any of these comments about the terrorism in Israel. Only for other countries.

The first comment was about Turkey, the second about Afghanistan, and the third about Cameroon fighting Boko Haram.

When it came to terrorist attacks against Israelis, all the State Department could muster was that “there’s just absolutely no justification for terrorism.” Why would anyone even think there’s a justification for terrorism? Why make such a comment only for Israel? Why withhold voicing support to fight against the terrorists as Kirby immediately did for all of the terrorist attacks in other countries?

This unwillingness to support Israel in fighting terrorists is similar to the Obama administration’s brother-in-arms, the United Nations, which repeatedly expresses its solidarity with countries in their fight against terrorism, but never stands with Israel in its efforts, as detailed in “Ban Ki Moon Has No Solidarity with Israel.”

Why doesn’t the US or the UN express support for Israel’s fight on terrorism? A few reasons:

The repeated comments by the Obama administration make clear that the United States abhors the use of terrorism against civilians, but considers the tactic in relation to potential goals of the groups. For example, the Islamic State/ ISIS wants to replace Iraq and Syria and much of the Middle East with a new caliphate. Boko Haram wants to create an Islamic State in Nigeria. The Kurds want independence from Turkey in their own country. These are goals that the Obama administration does not support so he voices his support to fight against terrorism in those instances because he does not support the terrorists’ mission. (Why Obama turns his back on an actual distinct ethnic group like the Kurds who seek independence, but rallies behind Palestinian Arabs who are part of the broader Arab world is a mystery to analyze another time.)

What angers many people in the pro-Israel community, is the willful ignorance of Obama and UN Secretary Ban Ki Moon about the stated objectives of Palestinian Arab terrorists. The Hamas Charter states clearly its goals for killing Jews and destroying Israel. The Fatah Constitution, which Obama likes to call “moderate,” calls for wiping out the “Zionist invasion.” These are not calls for an independent country alongside Israel, but replacing Israel.

But the US and UN do not want Israel to “fight against terrorism” the way that other governments do to protect their citizens, because they would like to see the establishment of a new state of Palestine. As such, the US condemns Palestinian terrorism (the UN almost never does), but will not advocate a forceful response to “end this wanton violence.”

Terrorism by a Community, Not a Small Group

The terrorism against Israelis does not sit in a small Gazan vacuum.

In the last election ever held by Palestinian Arabs, they elected the terrorist group Hamas to 58% of the parliament.

Additionally, an ADL poll in May 2014 found that almost every single Palestinian Arab – 93% – were anti-semitic.

How then does one deal with a hatred and terrorism that is supported so broadly among Palestinian Arabs?

If the elected leadership and the majority of the people support terrorism, should it continue to be called “terrorism,” or should it be called “war?”

Terrorism continues around the world and the Obama administration condemns it, but it refuses to support Israel’s active defense of its citizens, even while supporting every other country in the world in the same breath.

How should Israel supporters feel?

Select Support in Fighting Terrorism from the US State Department

US State Department Comments on Terrorism in Israel and the Territories