The “Would you rather…” game has been played by young children, adults and seniors around the world. People in the game have a question poised between two seemingly comparable good or bad choices and must decide which is more appealing. The games can be funny or revealing about how people think. Examples include:

The game can reveal something about an individual’s fears, preferences and priorities.

In February 2017, a group from the University of North Carolina, Florida State University and University of Queensland published a study in which they asked the study participants a series of “Would you rather…” questions to test how they valued their reputations. The study was entitled “Death Before Dishonor,” and produced interesting findings as to the lengths that people would go through (theoretically) to avoid being branded as a bad person. (A sample question was would you rather die immediately or live to 90 but be known as a pedophile?) The study concluded that people treated their reputations very seriously – to the point of death or dismemberment – or at least wanted the test-takers to believe that they were not terrible people.

Professional negotiators dabble with such “would you rather” tactics in particularly difficult negotiations, posing questions to the two parties which might reveal where they stand on seemingly intractable situations.

Consider the thorniest question in the long-running Arab-Israeli conflict: the Temple Mount in Jerusalem.

How would the Israelis and Palestinian Authority each respond to the question: Would you rather have sovereignty over the Temple Mount/ Noble Sanctuary or have control over it?

One scenario would have the Temple Mount be under complete Israeli sovereignty, but the Palestinian Authority would have administrative control over the 35 acre compound. For example, the PA could decide to restrict access to the compound only to Muslims, but an Israeli flag would be flying over the Dome of the Rock.

The other scenario would have the Temple Mount be part of a new country of Palestine. However, Israel would administer the site, and could open the platform to daily Jewish prayer services.

If each party arrives at the same answer for the Temple Mount, an extra level of complexity would be added: the two sides would have to live with the opposite conclusion for the Cave of the Patriarchs in Hebron. So if the Temple Mount became part of Palestine, and the Jews had complete administrative control over the site, the Cave of the Patriarchs would therefore be part of Israel, but under Palestinian administration.

The two parties might still come to the same conclusions so the impasse remains. But even though the situation is unresolved, there is better clarity as to the motivations of the parties, which could, in turn, bring additional strategies to resolve the situation.

Something to consider on the 70th anniversary of the United Nations Partition Plan. 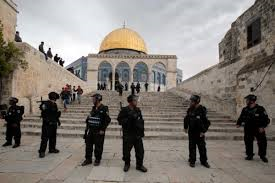 Dignity for Israel: Jewish Prayer on the Temple Mount

The UN’s Disinterest in Jewish Rights at Jewish Holy Places

2 thoughts on “Would You Rather Have Sovereignty or Control”