Summary: According to the Times, terrorists in Europe and Israel are very different and have different motivations.  If they weren’t, the hope that two states (Israel and Palestine) could live side-by-side in peace would obviously disappear.

The New York Times has taken to breaking the universe of Islamic terrorists attacking civilians into two camps: those that are hardened and trained to commit attacks, and those that do so as a result of their personal situation as opposed to their beliefs.  Curiously, that line is defined by geography.

Consider the January 17, 2015 reporting about the raids that prevented a terrorist attack in Belgium. The Times discussed “the expanding threat from radical jihadists, many of them battle-hardened in Syria and Iraq.” Another article on the same day questioned why Lunel, a small town in France “has come to earn the dubious distinction as a breeding ground for jihadists.” A third article that day clearly stated that attacks in Paris against the magazine Charlie Hebdo were by “jihadist gunmen”. In Europe, the Times is clear that attacks against civilians are done by radical jihadists. While the articles discussed Muslim anger at the insult to their prophet Mohammed by the Charlie Hebdo cartoons that ultimately instigated the attacks, that anger was only the final motivating factor to unleash actions embedded in the radical jihadist philosophy.

The Times does not view attacks against Israelis the same way.

On January 23, 2015 the NY Times explored the motivation of a Palestinian who stabbed a dozen Israeli civilians on a bus in Tel Aviv. Over and again the Times referred to the man as “angered by the war in Gaza… and tensions over the revered Aqsa Mosque.” The article stated that “the family was in debt and struggling” and described this assailant as well as another who attempted to assassinate a Jewish activist as stories of “dislocation”. The New York Times deliberately kept the motivations away from any categorization of “radical jihad” by saying that the assailant “was not considered an extremist.”

This description fits consistently with the Times narrative as written in its editorial page on January 1, when it described the Palestinians as “desperate.” The opinion piece suggested that the Palestinians are “deeply frustrated” by their lack of a state. The Times does not feel that Palestinians are engaged in a radical jihad against Israel in the same way European cities are facing Islamic extremism. It is curious that they arrive at such a conclusion when there are Palestinian polls and elections that consistently show an overwhelming support for Hamas, which mentions “jihad” against Israel 36 times in its charter (see the FirstOneThrough article below).

Several articles in the Times mentioned the anti-Semitism harbored by Amedy Coulibaly, the French Muslim who shot a policeman and four Jews in a kosher supermarket in Paris. They discussed his allegiance to the Islamic State which seeks to build a new state in the Middle East ruled by Islamic sharia law. However, the New York Times never mentioned that the Palestinians are the most anti-Semitic people in the world, with 93% of the population holding anti-Jewish views. It neglected to inform its readers that the popular Hamas party seeks to completely destroy Israel and set up an Islamic state ruled by sharia law.

Why does the Times continue to relay different motivations and narratives for jihadists in Europe and Israel?

The liberal newspaper would like to see a new State of Palestine established in the Middle East, whereas it is comfortable with the borders of countries elsewhere. The conundrum is that the Times’ hope for a new moderate secular Palestinian state alongside Israel is in conflict with the reality that the Palestinians are much more radical than the paper pretends.

To conceal the radical nature of the Palestinians today, the Times editorials and articles follow specific guidelines in reporting that:

In Israel, people see the jihad in Iraq, France, Nigeria and in their own country as a single violent movement of Islamic extremism. That is why Israeli Prime Minister Benjamin Netanyahu referred to Hamas and Islamic State as “branches of the same poisonous tree”. Should the Times ever decide to detail the full nature of Hamas beyond simply being a “militant group” and also discuss the huge support it receives by Palestinians, it would undermine the vision of two states living side-by-side in peace. Therefore, the pages of the Times state that Europe faces “radical jihadists” while Israel faces desperate, isolated and alienated Palestinians (who are in that situation only because of Israel).

However, hope is hardly honest reporting. 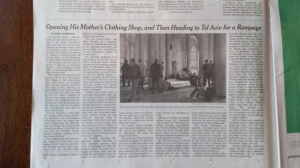 Palestinians are not “resorting” to violence: https://firstonethrough.wordpress.com/2014/11/19/the-palestinians-arent-resorting-to-violence-they-are-murdering-and-waging-war/

The extremism of the Palestinian positions: https://firstonethrough.wordpress.com/2014/10/25/extreme-and-mainstream-germany-1933-west-bank-gaza-2014/

17 thoughts on “Why the Media Ignores Jihadists in Israel”