Senator Bernie Sanders, Democratic Socialist and candidate for United States president, has been vocally against the Israeli government which he has called “racist,” and against Israel’s “military occupation” of Palestinian land which denies the Palestinians “dignity.”

Whether one agrees or disagrees with the notions of Israeli Prime Minister Benjamin Netanyahu being a racist, or whether there is a “military occupation,” it requires a certain twisted logic for Sanders to condemn Israel and advocate for Palestinians, while simultaneously advocating for strong background checks in regard to gun safety.

Liberals may note that Sanders spent twenty years opposing any gun control including background checks as a senator from a rural state but he has taken to aggressive background checks now that he is running for president. His campaign specifically calls out:

Under current federal law, those convicted of domestic abuse can lose their guns if they are currently or formerly married to their victim, live with the victim, have a child together or are a victim’s parent or guardian. Sanders supported a 2019 amendment expanding the law to stalkers and current or former dating partners. His current campaign pledge of “red flag” laws would further extend those laws to enable law enforcement to seize guns from people who are accused of being a potential threat, even if they have not been convicted of anything.

So Sanders believes that the second amendment of the United States, “to keep and bear Arms,” is not really a right but a privilege, and one which can not only be taken away once convicted by a court, but even with a mere accusation.

Advocates like Sanders argue that such legislation is required to address gun violence – against women in particular – even if it may mean that some Americans are able to own guns while others are not.

Which brings us back to the Israeli-Palestinian Conflict and Sanders objections to Israel.

For decades, the working assumption of a two-state solution included the proviso that a new Palestinian state would be demilitarized, meaning that it would have no standing army. The Trump peace plan advocates for the same, specifically calling for Israel to have full control of border crossings and control of the air. Objectors have stated that such ruling denies Palestinians their dignity and leaves them under Israeli military control. These objectors claim that a Palestinian state without an army is no country at all.

Curiously, many of these detractors in the United States are also progressives who support strict gun control to protect victims and curb violence. However, they excuse the wars, intifadas, stabbings, rockets and bombings of Palestinian Arabs against Israelis. They ignore the incitement to violence and the demonization of Jews from the Arab media and leadership. They discount the antisemitic laws which call for the death penalty for any Arab selling land to Jews. They scoff at polls which show that 93 per cent of Palestinian are antisemitic. For them, the Palestinian Arabs are the victims and any law or aggression they take are purely defensive in nature. It is a “resistance.” 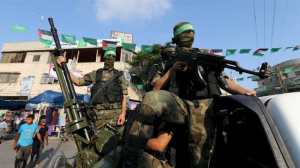 Members of the al-Qassam Brigades, the armed wing of Hamas, in the southern Gaza Strip [File: Ibraheem Abu Mustafa/Reuters]

But the reality is clear: Jews are the most persecuted people in history. Arabs have attacked them since they began coming back to the land of Israel in the 1920’s. To this day, the Palestinian Arabs continue to pay people who kill Jews and voted Hamas to 58% of parliament with the most antisemitic charter in the history of the world.

So the future of a possible two-state solution will have Israel controlling Palestine militarily. It may not meet Bernie Sanders’ ideal of Palestinian “dignity,” but there has never been a group which failed a background test so fantastically.

Time to Dissolve Key Principles of the “Inalienable Rights of Palestinians”

Half Standards: Gun Control and the Iranian Nuclear Weapons Deal