Jews living in various parts of the Holy Land is problematic for some people. Different statements and actions in the fall of 2016 brought various matters to the public attention, but few people understand which “settlements” actually “crossed the line.”

President-elect Donald Trump made statements after his election victory, that he planned on moving the US embassy in Israel from Tel Aviv to Jerusalem, which Israel has long designated as its capital. Today, it is not nearly as controversial as it once was.

The initial controversy of recognizing Jerusalem as Israel’s capital stemmed from the 1947 UN Partition Plan which allocated Greater Jerusalem and Greater Bethlehem into a “corpus separatum,” an international zone called the “Holy Basin.” While the Jews accepted the proposal, the Arabs rejected it and launched a war to eliminate the Jewish State. At war’s end, Israel controlled the western part of Jerusalem, while the Arabs took all of Greater Bethlehem and the eastern part of Jerusalem. Jordan expelled all of the Jews from the region, granted citizenship to all of the Arabs (specifically excluding Jews) and annexed the region, in a move never recognized by any country in the world. 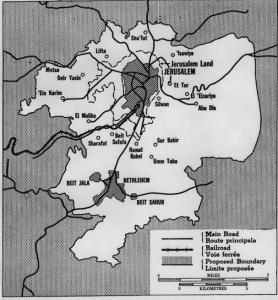 While the western half of Jerusalem has been always been inside of the 1949 Armistice Lines / the Green Line, many countries still did not want to move their embassies to Jerusalem in the expectation that some solution would evolve to create a two state solution, which would also settle the question of Jerusalem and Bethlehem.  After Jordan attacked Israel in 1967 and lost all of the land east of the Green Line (EGL) including Bethlehem and the eastern part of Jerusalem, a solution appeared even more distant.

Today, the only part of the Holy Basin that remains disputed is the eastern half of Jerusalem. (Granted there are terrorist groups like Hamas that refuse to acknowledge Israel’s rights over the western part of the Jerusalem, but for that matter, Hamas refuses to recognize Israel’s right to exist at all.) As of today, the only countries that do not recognize that the western part of Jerusalem is part of Israel are the same countries that do not believe in Israel’s right to exist.

As such, moving the US embassy to Jerusalem is no longer controversial, any more than recognizing the Jewish State.  Congress voted to approve moving the embassy in October 1995, at the time of Oslo II. However, US presidents have withheld executing the move as the broader Israeli-Arab peace has still not been realized. 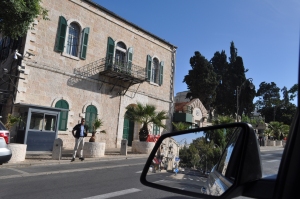 US Consulate in Jerusalem is not an embassy
(photo: FirstOneThrough)

Moving the US embassy to Jerusalem does nothing to alter the negotiations between the Israelis and Palestinian Arabs that want to make peace. Withholding the move simply rewards entities like Hamas that are at war with Israel.

Jews in Apartments in the Eastern Part of Jerusalem
(Over the Green Line, but not Crossing the Line)

After Jews reunified the city of Jerusalem in the 1967 Six Day War, they moved back into the eastern half of their holiest city. Not only did they return to the Jewish Quarter of the Old City, but to other sections outside of the Old City walls, like Silwan, which was founded in the second half of the 19th century by Yemenite Jews.

Jews returning to the area was viewed as controversial by Arabs, who had banned Jews from the region while they controlled the area from 1949 to 1967.  However, international law clearly stated that “No person shall be excluded from Palestine on the sole ground of his religious belief.” (Mandate of Palestine, Article 15).

Yet US President Obama preferred to endorse the anti-Semitic agenda of the Palestinian Authority in condemning Jews for moving into apartments that they legally purchased in Silwan. In October 2014, White House spokesman Josh Earnest said “The US condemns the recent occupation of residential buildings in the neighborhood of Silwan by people whose agenda provokes tensions.”

The scenario was hard to fathom. The first black president in US history condemned people for moving into a neighborhood because such action was viewed with hostility by the current residents. Would Obama have sided with white racists in the 1950s in Selma, GA that were against blacks moving into the neighborhood?

The apartments which Jews had purchased were in existing buildings in their holiest city. To characterize the actions as a “occupation of residential buildings” made the action sound like a military maneuver against Arabs, rather than a normalization of people coexisting. 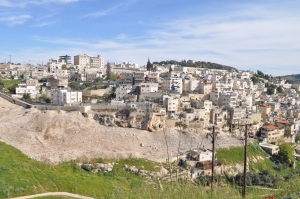 Silwan, in the eastern part of Jerusalem
(photo: FirstOneThrough)

While the apartments were over the invisible Green Line (which was clearly defined as not a permanent border in the 1949 Armistice Agreement), the Obama administration was completely wrong that such actions crossed the line of appropriate behavior.

On November 15, 2016, the Israeli Knesset voted to legalize Jewish homes in Judea and Samaria that were built on private Palestinian Arab land.

International law gave Jews the right live anywhere in Palestine, as described in Article 6 of the Mandate of Palestine “shall facilitate Jewish immigration under suitable conditions and shall encourage… close settlement by Jews on the land, including State lands and waste lands not required for public purposes.”  But private property is not state land.  The introduction of Article 6 states “The Administration of Palestine, while ensuring that the rights and position of other sections of the population are not prejudiced…”  It is unjust and immoral to seize an individual’s private property unless there are extenuating circumstances.

This does not appear to be one of those cases.

There is a broad movement to delegitimize Jews who are living anywhere in the Holy Land. That is wrong and anti-Semitic. However, those disgusting calls to expel and ban Jews from living in homes they have every legal and moral right to inhabit, should not override the rights of Arabs to live on their private property as well.

Israel was never a British Colony; Judea and Samaria are not Israeli Colonies

7 thoughts on ““Settlements” Crossing the Line”