It was a mild January evening in Westchester County, New York, and a number of people assembled in a private home to consider promoting the former mayor from New York City, Michael Bloomberg, to become the Democratic candidate for president.

The Democrat Party already had an over-supply of people running for president but people in this liberal enclave were concerned that none of them could defeat Donald Trump. So thirty middle-aged Jews assembled to consider how they could help propel Mike into the coveted role to challenge the president.

A member of Bloomberg’s campaign responsible for bringing out the Jewish vote was already speaking when a Libertarian who had walked away from the Democratic Party and his teenage son joined the presentation. The two grabbed seats and listened.

The audience was clearly liberal and talked about how they wanted anyone but Trump but feared that none of the candidates could actually beat him. Bloomberg’s point man essentially said that Bloomberg gave Jews all of the things they liked about Trump (the strong economy and support of Israel), without any of his terrible policies regarding immigrants, the LGBT community, the environment and a host of other failures. The audience nodded in approval.

Except for the Libertarian.

“I’m not here as an anyone but Trump person. I’m here as an anyone by Sanders or Warren person. Those two will lead this country into a civil war and/or an abyss. If Sanders wins the nomination, not only will I vote for Trump, I will actively campaign and raise funds for him.”

An awkward silence filled the air. The liberals could not fathom a fellow Jew despising a progressive.

The Bloomberg point man broke the tension by asking people to bring up items which were most important to them. A hand sprang up and a 60-year old man yelled “abortion!” Another person said “income inequality.” A third said “gun control.”

The sole teenager in the room offered “addressing the ballooning national debt.” People paused and noted that they appreciated that a young person was concerned about the outrageous debt he was being handed as an inheritance, but one sensed that they were disappointed that he did not say “climate change.”

When the moderator asked about people’s concerns about the mayor, several people talked about his stop-and-frisk policy which seemed racist, and whether the country was interested in voting for a Jewish billionaire. The Libertarian silently took notes and didn’t offer up his concerns, of which there were plenty:

But that night was not about trashing Bloomberg as much as trying to get him off of a slow and cold start.

Bloomberg’s Jewish liaison made a point that Bloomberg was not going to run a campaign focused on attacking his Democratic rivals; he believed that they were already too weak, with the exception of Sanders who Bloomberg felt could never win. But left unsaid was the objection of Bloomberg and the attendees that night to the other moderates running:

So enter sandman, Mike Bloomberg, playing Yankee reliever Mariano Rivera in the late innings. Will he save the Democratic Party from embracing the alt-left? Will he do it by ultimately putting his money behind either Klobuchar or Buttigieg, rather than backing himself?

For now, Bloomberg is the only name which brings #NeverTrumpers and #NeverSanders into the same room. 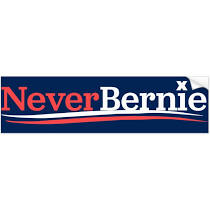 This July 4, I am Leaving the Democratic Party that Left Me Long Ago

When the Democrats Opposed the Palestinian “Right of Return”

Will the 2020 Democratic Platform Trash Israel?

The Democratic Socialists Tell Lies and Half Truths About Lobbyists

The U.S. is Stealing Real Choices from the Voters

When Only Republicans Trust the Police

Is Calling Someone a ‘Nazi’ Simply a ‘Poor Choice of Words?’ Ask a Westchester Democrat

If You Want to Take Money out of Politics, Liberal Leaders Suggest Voting for Trump