In 1962, the television show The Twilight Zone aired a show called “To Serve Man.” The show featured aliens arriving at the United Nations in New York City who presented themselves as saviors who would bring forth a new era of peace and prosperity for mankind, ending starvation and wars on Earth. Their proposal was greeted warmly, and their manifesto, “To Serve Man,” was understood as a friendly call to service mankind. Only as humans alighted the alien spacecraft to embark on a mission of bi-planet relations, was it revealed that their manifesto was actually a cookbook and humans were on the alien menu.

The friendly face of the United Nations itself is such an alien creature, whose stated mission to service is limited to its authoritarian masses, while it places Jews and the Jewish State in its cross-hairs for devouring. 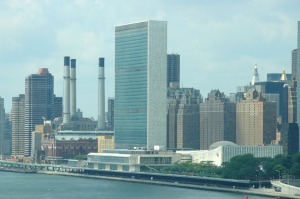 The UN was formed at the end of World War II as an outgrowth of the League of Nations. Its new mission was more aggressive than its predecessor, and sought to ensure human rights and promote coexistence as a reaction to the terrible global war and genocide of Jews. But the years after 1945 witnessed the emergence of dictatorships, monarchies and authoritarian regimes around the world which joined the UN, changing its mission to a distorted notion of human rights and decency.

The sole Jewish State became the most targeted country by the United Nations. The various UN agencies advanced specific standing items which called out Israel. So it was a regular day at the UN when the General Assembly passed a resolution in 1975 that equated the national aspiration of Jews as uniquely detestable, with the Zionism is Racism resolution. It was more of the same when the UN Security Counsel declared in 2016 that no Israeli Jews should be allowed to live east of the 1949 Armistice Lines.

The hunger for Jews continued in February 2020, as the antisemitic UN added to its menu, featuring not only Jews but also companies that service Jews.

A February 12, 2020 report to the UN Office of Human Rights listed 112 companies which are “involved in certain activities relating to settlements in the Occupied Palestinian Territory.” A total of 94 companies are Israeli and the balance are headquartered in six other countries including the United States. American companies listed include Expedia, Trip Advisor and Airbnb.

So imagine the following scenario: an Israeli Jew and and Israeli Arab who both live in the Israeli city of Jaffa decide to move to the Old City of Jerusalem. The United Nations brands the Israeli Jew as an illegal settler, but not the Israeli Arab. When each of them decides to rent a room in their apartment on Airbnb, the action of the Jew is considered a grave human rights issue, but not when the Arab uses the Airbnb service.

This backward Taliban mentality has become a core of the UN, as anti-Zionism fervor has characterized the reestablishment of the Jewish State as an appalling injustice which must be righted by serving it up whole to its rightful Arab owners.

In 1945, Jews welcomed the creation of the United Nations and the Universal Declaration of Human Rights. In theory and in hope, the new world order was designed to protect everyone including Jews who would be guaranteed the right to own property (Article 17) and pray at Judaism’s holy sites (Article 18). At inception, the UN seemed to be an organization meant to service all of mankind, but like an episode of the Twilight Zone, the UN blueprint became a recipe book to devour Jews, the Jewish State and any person or organization who services Jews.

Real and Imagined Laws of Living in Silwan

The Nerve of ‘Judaizing’ Neighborhoods

The New York Times All Out Assault on Jewish Jerusalem

The United Nations Bias Between Jews and Palestinians Regarding Property Rights