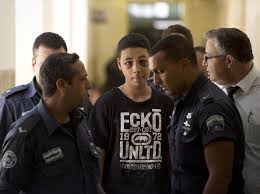 The year 2014 was notable for the global escalation in terror and death compared to prior years.

Various news agencies highlighted the most significant news events which ranged from Ebola to Russia’s invasion of Ukraine. They selected new events that impacted thousands of people in 2014 which had potentially long-term consequences.

The New York Times year-end review posted dozens of pictures of conflicts around the world to encapsulate 2014.  In my opinion, the NYT picture that  summed up a dominant theme in its reporting for 2014 was the picture above, of a 15-year old Arab surrounded by Israeli policemen. For the New York Times, the stories on its cover pages in 2014 repeatedly told the story: that Israel attacks Arab youths.

The large color picture was displayed on its cover page on July 7, 2014. The bruised 15-year old Arab boy was being escorted out of a police station where he had been detained after throwing stones in a riot. There are several things that make the front-page treatment of the teenager note-worthy:

The beating of an Arab youth by Israeli forces was given more prominence and therefore deemed more important than those other world events.

This New York Times news story came shortly after three Israeli teenagers were abducted and murdered by Palestinians. The New York Times never placed even a small black-and-white photo of any of the three Jewish teenagers on the front page. Their plight was also not viewed as important by the Times.

Over the course of the next several weeks as Operation Protective Edge unfolded, the New York Times continued to put pictures of Palestinian children on the front page of the paper. Throughout July (July 11, 14, 17, 21, 22, 24 and 29th) the paper had pictures of Palestinians suffering on the front page. It took until July 29 – buried on page A6 – for the Times to write about and post a single picture of the Hamas terror tunnel network that was a main factor in launching the Israeli ground invasion of Gaza.

Further, Palestinian leadership, whether Hamas leaders such as Khaled Mashal or acting Palestinian Authority president Mahmoud Abbas, never were pictured on the pages of the Times during Operation Protective Edge (the only leader to be pictured was Ismail Haniya on September 4 page A10, well after the fighting had stopped). The paper only showed pictures of Arab civilians. However, Israeli Prime Minister Benjamin Netanyahu’s picture was shown often (July 7 twice; July 22; July 27; July 29; August 7), as were Israeli police and soldiers. The overall message of the New York Times was clear: the Israeli government was attacking Palestinian youths and civilians; it was not a war between opposing government authorities.

The Times news stories and editorials built additional narratives onto this theme, regardless of inaccuracies. In attempts to make the Israeli government seem callous to the conditions of Arab youth, an article and editorial on July 7 and July 8 stated that “days of near silence” passed before Israel Prime Minister spoke about the killing of an Arab teenager by Israeli radicals. This was completely untrue and it took days for the NYTimes to print a correction (below).

The NYT editorial board led with a piece on July 19 entitled “Israel’s War in Gaza”.  It was not called “Hamas’ War against Israel”, nor was it called the “War Between Hamas and Israel”.  The Times continued to paint the battle as an aggressive Israeli action against a populace.

In case there was any confusion in the New York Times message to its readership, it included another small picture of Netanyahu near its large picture of the year. (By way of comparison, did you ever see the NYT post a picture of US President Obama near an article about drone strikes or deaths in Afghanistan that he specifically ordered and oversaw?)

The New York Times tried to defend its coverage of the Gaza conflict by printing an editorial on November 23, 2014 entitled “The Conflict and the Coverage”.  Not surprisingly, it attempted to defend its poor media coverage and that it tried too hard to offer “symmetry” in the conflict. It claimed that the paper has “baseline beliefs that Israel has a right to exist and that the Palestinians deserve a state of their own.” The charitable Times board believing that “Israel has a right to exist,” clearly doesn’t extend to: believing that Israel has a right to defend itself; that it was reluctantly pulled into a battle in Gaza; that it sought to minimize Arab casualties; that Hamas is rabidly anti-Semitic; that Hamas leaders are intent on destroying Israel and killing Jews; and that Arab leadership was responsible for the war and deaths of both Israelis and Palestinians.

Times moved picture down in online of story: http://www.nytimes.com/2014/07/07/world/middleeast/israel-palestinians-muhammad-abu-khdeir.html

Every Picture Tells a story: https://firstonethrough.wordpress.com/2014/07/04/every-picture-tells-a-story-dont-it/

Bibi as a killing monster: https://firstonethrough.wordpress.com/2014/07/08/every-picture-tells-a-story-part-ii/

An article on Monday about the arrest of six Israelis in the killing of a Palestinian teenager referred incorrectly to Prime Minister Benjamin Netanyahu’s response to the killing of Muhammad Abu Khdeir. On the day of the killing, Mr. Netanyahu’s office issued a statement saying he had told his minister for internal security to quickly investigate the crime; it is not the case that “days of near silence” passed before he spoke about it. The error was repeated in an editorial on Tuesday.” 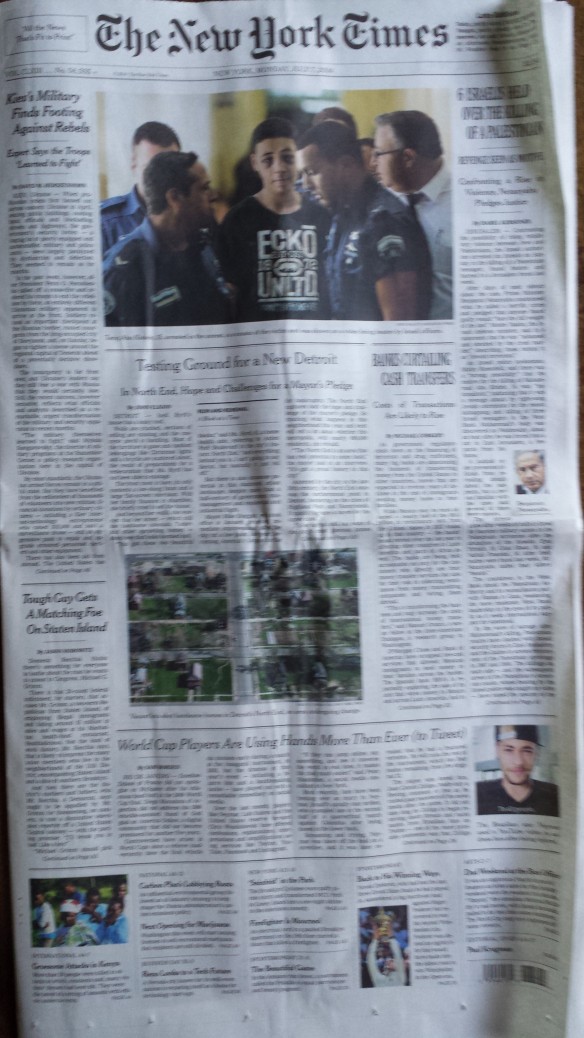