On March 22, 2017 a terrorist attack in the heart of London left several people dead. The description of the attack from two leading media companies took very different approaches.

The Wall Street Journal made no bones about the terrorist and his motives. In the opening lines of the lead article “London Rampage Leaves 4 Dead,” the paper wrote “A suspected Islamist Terrorist mowed down scores of pedestrians…” The article continued to underscore the ongoing battle with Islamic terror at various points: 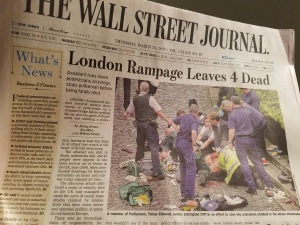 The New York Times ran an article “Deadly Attack Near U.K. Parliament; Car Plows Victims on Westminster Bridge,” which ran over 1700 words. At no time did the article mention the words Muslim or Islamic.

The Times referred to a “knife-wielding assailant” carrying out the attack and that the “assailant” had been killed. The only reference that the terrorist was even a male came from third party sources such as Prime Minister Theresa May confirming “that the attack had been carried out by a lone male assailant.” Witnesses gave corroboration that the attacker was a “middle-aged man holding a knife.”

I’m glad that the Times was avoiding male-bashing. Or maybe it was because the New York Times did not want to assume that the terrorist did not identify as a woman?

The Times did quote someone that noted that these kinds of terrorist attacks have occurred in other countries – including Israel.

“Political violence is relatively rare in Britain, where gun ownership is stringently restricted…. Jeremy Shapiro, a former State Department official now at the European Council on Foreign Relations, said that the London attack was consistent with the recent pattern of attacks in which a vehicle was used to kill people, citing assaults in France, Germany and Israel.”

That was an improvement relative to the Wall Street Journal that recalled vehicular attacks in France and Belgium, as well as Islamic terrorism in Canada. But not such terrorism in Israel.

Pretty extraordinary, since the car-ramming attacks in Israel were so prevalent in recent years.

For some time, The New York Times has avoided labeling terrorism as having anything to do with Islam. It has now seemingly made a further pivot to label terrorism as politically (not religiously) motivated, which may let it acknowledge the incessant terrorism waged against Israel by Palestinian Arabs. (The liberal editors of the Times will seemingly forever ignore the Hamas Charter which declares “Our struggle against the Jews is very great and very serious,” and “In face of the Jews’ usurpation of Palestine, it is compulsory that the banner of Jihad be raised.“)

Should the pro-Israel community claim a small victory? Maybe.

The Media Finds Religion in Matters of Security. Sometimes.

New York Times’ Lost Pictures and Morality for the Year 2015