I went to see the new play Oslo at Lincoln Center in New York City. It is always a fun New York moment when people in the news – in this case Joe Lieberman who just withdrew from a potential job at the FBI – are in line with you to enjoy the many great activities that the vibrant city has to offer.

The show was quite good. It relayed the behind-the-scenes activities that brought the Oslo Accords of 1993 into being. It tried to be balanced to the narratives of both Israelis and Palestinian Arabs, while not getting into a debate about particular issues. The emphasis was much more on the process, than the merits of either sides’ arguments.

The balance made me recall one of the statements that came out of the Oslo accords:

“REAFFIRMING their determination to put an end to decades of confrontation and to live in peaceful coexistence, mutual dignity and security, while recognizing their mutual legitimate and political rights;”

It is a concept that has lost meaning regarding Israel today.

Over the eight years of the previous presidential administration, Barack Obama repeatedly boasted about his bona fides regarding Israel because he had “Israel’s back” when it came to matters of security. He helped fund the Iron Dome defense shield. He shared a lot of intelligence about security threats. He signed a new $38 billion military aid package.

Obama assumed that by focusing on Israel’s need for security, he could abuse the dignity of its leader and country.

Obama felt that he could solely focus on Palestinian Arab dignity and Israeli security. In doing so, he abused the Jewish State and has helped lead to a twisted “progressive” approach to Israel which denies Israel its dignity today.

Much of the reason that Israelis have warmly embraced the new US President Donald Trump is that they believe that he will not only focus on Israeli security, but on its dignity as well. 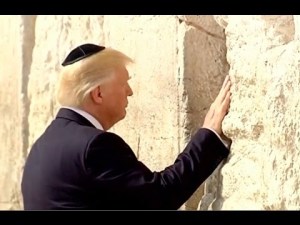 Trump was the first sitting US president to ever visit the Wailing Wall in Jerusalem, a sacred site for Jews. And when he spoke to a crowd at the Israel Museum, he spoke of “dignity” four times:

The Jewish State demands more than security. It demands dignity that has been denied it around the world.

It is time for both Israel and Jews to demand their dignity again. Especially on the 50th anniversary of the defeat of the Arab nations that sought to annihilate every Jew in its small homeland.

Aside from the terrible negotiation tactics utilized by Obama and his Secretary of State John Kerry in foreign affairs, he ignored a basic decency: the dignity of Israel and the Jewish people. It is time to bring it back to the fore.

It’s the Temple Mount, Not the Western Wall

An October 2016 vote by UNESCO condemned Israeli activities around the Jewish Temple Mount in the Old City of Jerusalem. Israeli Prime Minister Benjamin Netanyahu noted the farce of the resolution that distanced the Temple Mount from Judaism.  The UNESCO resolution even prompted the spokesperson for the UN Secretary General to read a prepared statement on two occasions, on October 14 and again on October 18:

“… the Secretary‑General reaffirms the importance of the Old City of Jerusalem and its Walls for the three monotheistic religions and stresses the importance of the religious and historical link of the Jewish, Muslim and Christian peoples to the holy site.  The Al Aqsa Mosque/Al‑Haram al‑Sharif, the sacred shrine of Muslims, is also the Har HaBayit — or Temple Mount — whose Western Wall is the holiest place in Judaism, a few steps away from the Saint Sepulchre church and the Mount of Olives, which is revered by Christians.  The Secretary‑General reiterates that any perceived undertaking to repudiate the undeniable common reverence for these sites does not serve the interests of peace and will only feed violence and radicalism.  He also calls on all sides to uphold the status quo in relation to the holy sites in the Old City of Jerusalem.”

The statements made many pro-Israel people happy, as it was a marked improvement from the UNESCO resolution.

Over the last 500-or-so years, Jews have come to venerate the Western Wall as holy, even though it has no more inherent holiness than the southern or eastern retaining walls of the mount.  For example, rabbis do not recommend a person visit a mikvah, a ritual bath, before visiting the Western Wall, as they insist for Jewish visitors to the Temple Mount.

While it was appreciated that the spokesperson for the UNSG chose to politely distance himself from the horrible UNESCO resolution, it would have been far better to:

It is worthwhile to educate Jews about these basic facts as well.

The Temple Mount in Jerusalem

Visitor Rights on the Temple Mount

Tolerance at the Temple Mount

Losing the Temples, Knowledge and Caring