There is no shortage of anti-Semitism in the world.

The Anti Defamation League (ADL) conducted polls in 2014 (somewhat updated in 2015) which showed that many people felt that Jews had too much control of the media and financial markets.  Some respondents believed that Jews were too pompous or were engaged in activities that made people hate them.

The Islamic countries were the most anti-Semitic by a far margin. The rankings:

you get the idea.

These percentages dwarfed the non-Muslim countries like Japan 23%, Italy 20%, and Brazil 16%.

A further analysis revealed a split in the nature of the anti-Semitic feelings.  Even countries which showed an inclination for Jew-hatred, appreciated that Jews were not responsible for the wars in the world.  That was an opinion uniquely held by Muslims.

Consider Turkey and Greece.  The two neighboring countries have a long and strained relationship with each other, mostly over land and religious matters (Turkey is Muslim and Greece is Christian).  Interestingly, the countries have nearly identical negative feelings towards Jews, with Turkey and Greece having 70% and 67% anti-Semitic attitudes, respectively.  However, the underlying reasons behind the hatred in the two countries were quite different.

Similar attitudes overall, and a trend that would suggest that Greeks were even more anti-Semitic than the Turks.

Outside of the Muslim world, very few countries believed that Jews were responsible for world wars, even among the anti-Semites.

The ADL started to segment the respondents of some European countries with a significant Muslim population. The Muslims were significantly more anti-Semitic than fellow citizens.

As the non-Muslim world sees the Muslim world at war with itself in Syria, Yemen and elsewhere, it has concluded that Jews have nothing to do with the anarchy, death and destruction.  But the Islamic world turns to an old familiar scapegoat and blames the Jews.

They believe that the cause of their misfortune is not their own inept governments or co-religionists. It is the Jews. 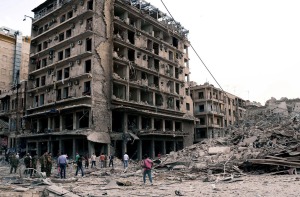 The terrorist Islamic group Hamas makes its thoughts clear in its charter, Article 22:

“For a long time, the enemies have been planning, skillfully and with precision, for the achievement of what they have attained. They took into consideration the causes affecting the current of events. They strived to amass great and substantive material wealth which they devoted to the realisation of their dream. With their money, they took control of the world media, news agencies, the press, publishing houses, broadcasting stations, and others. With their money they stirred revolutions in various parts of the world with the purpose of achieving their interests and reaping the fruit therein. They were behind the French Revolution, the Communist revolution and most of the revolutions we heard and hear about, here and there. With their money they formed secret societies, such as Freemasons, Rotary Clubs, the Lions and others in different parts of the world for the purpose of sabotaging societies and achieving Zionist interests. With their money they were able to control imperialistic countries and instigate them to colonize many countries in order to enable them to exploit their resources and spread corruption there.

You may speak as much as you want about regional and world wars. They were behind World War I, when they were able to destroy the Islamic Caliphate, making financial gains and controlling resources. They obtained the Balfour Declaration, formed the League of Nations through which they could rule the world. They were behind World War II, through which they made huge financial gains by trading in armaments, and paved the way for the establishment of their state. It was they who instigated the replacement of the League of Nations with the United Nations and the Security Council to enable them to rule the world through them. There is no war going on anywhere, without having their finger in it.”

The world watches in horror the brutality of ISIS torturing and slaughtering anyone outside of their narrow Islamic view. The world is appalled at the destruction of Aleppo and the murder of civilians in Syria. And the world understands full well, that this is battle where the Jews have no part.

Except the Muslim world.

In January 2009, Asma al-Assad, the first lady of Syria, gave an interview on CNN criticizing Israel’s first war against Hamas in Gaza. The FirstOneThrough review with an overlay of news stories went viral and is below.

The irony of the interview can be viewed on different levels in August 2014:

The Muslim Brotherhood was a banned political party in Syria. Asma al-Assad’s father-in-law, Hafez al-Assad banned the party and imposed the death penalty on its members in 1980. In 1982, Hafez al-Assad sought to crush the Brotherhood in Hama, where he slaughtered over 20,000 people – over 740 Syrians per day on average for 27 days – and then leveled the city.

Palestinians: The Palestinians who reside in Syria are treated as illegals – even though they have been there since 1948. They are denied citizenship. The are not given the rights to own property or hold white-color jobs.

Since the Syrian Civil War began, Palestinian Arabs have been pushed from their homes to Jordan and have been shelled repeatedly by al-Assad’s Syrian army.

Youth: Asma al-Assad talks about the significant youth population in the Middle East and Syria who have hopes for a brighter future. Over 10,000 children have been killed in her husband’s civil war, or over 8 children per day for over three and one-half years.

Comments by first lady of Syria with an overlay of current news of war on Syrians.