There are some pro-Palestinian slogans which have become popular such as “Free Palestine.” Such language presumes that the country of Palestine exists today and is in a state of occupation by a foreign power(s). Many people believe that the contours of such “Palestine” is as it was in 1922 when the British assumed the Mandate of Palestine, or the configuration of 1924, after the British split off the land east of the Jordan River for the local Hashemite tribe which became the country known as Jordan today. 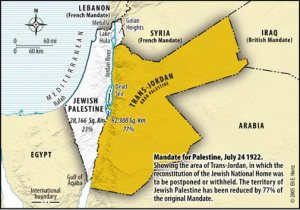 Their calls to “Free Palestine” are often accompanied by “From the river to the sea, Palestine will be free.” This clarification of “Palestine” clearly excludes the area of “Trans-Jordan” and targets areas west of the Jordan River to the Mediterranean Sea: Israel, Gaza and the region commonly referred to as the “West Bank.” The call for “freedom” is a call for an eradication of the Jewish State of Israel.

A CNN talking head by the name of Marc Lamont Hill made both of these calls at the United Nations this week. After he was fired from his CNN gig for the comments to destroy Israel, he poked his fingers into the cloud on Twitter and later in an article, stating that he was not calling for the killing of Jews, just the eradication of the Jewish State which should be replaced by a “bi-national” state throughout the region. Just a few sentences later he reversed that opinion calling for “a redrawing of borders to the pre-1967 lines,” seemingly suggesting that he does not want a single bi-national state in the land “from the river to the sea,” but one bi-national state in Israel and a separate purely Arab state of Palestine.

All of Lamont Hill’s comments and explanations are against a backdrop of his oft-repeated comments that the entirety of Israel is illegal, “stolen by greed and destroyed by hate,” with laws “written in the blood of the innocent.” He calls for a “revolutionary struggle” and “fight for freedom” against Israel.

This far left-wing mouthpiece was seemingly now tripping over himself as he tried to keep his job as a teacher at Temple University, and maybe have a shot at making some coin at other venues spouting his radical opinions.

His comments and explanations shed light on the various audiences which listen to such diatribes.

One group includes radical Islamists that instigate violence against the Jewish State. These forces include terrorist groups like the political party Hamas, Hizbullah and Palestine Islamic Jihad, as well as student groups like Students for Justice in Palestine. These organizations are hate groups which loudly embrace the calls of “Free Palestine” and “from the river to the sea…” in the most straightforward manner: destroy Israel.

A second group who loves these slogans are relatively more moderate and include radical progressives. They do not want to slaughter millions of Jews in Israel (ain’t that special?), but they also don’t believe that the Jews have any rights to live in “Palestine.” This group seeks to normalize the notion that Israel is an illegal enterprise and that the Arab terrorist groups are nothing more than “resistance groups” against the theft of their land and heritage.

The first group seeks a war of arms and the annihilation of Israel. The second group wants Israeli Jews neutered, without a Jewish State.

Lamont Hill’s first declaration at the UN was made for the former, the Arab and Muslim extremists that call for the eradication of the Zionist experiment.

Lamont Hill’s subsequent “clarifying” statements were for the alt-left wing, which hopes that through the normalization of extremist language and demands such as boycotts of Israeli professors and goods and calling Israel a “colonial power” which “ethnically cleanses” the land of Arabs, it can arrive at a very favorable pro-Arab result in negotiating a two-state solution. With the pro-Israel camp beginning in a middle-of-the-road position while the pro-Arab camp starting in the far extreme, a compromise would highly skew in favor of the Palestinian Arabs.

Solutions to these radical Islamist extremists’ and far left-wing progressives’ assaults on Israel are two-fold: a vigorous challenge to the slogans and people, as well as a re-positioning of the pro-Israel stance in a similar refrain. Hopefully the two-pronged approach will bring the pro-Palestinian parties towards the middle and enable an enduring peace.

Challenge the Extremist Slogans and People

Lamont Hill should not have been fired from CNN in November 2018. He should have been fired from CNN, Temple University and every other venue back in January 2015 when he reached back into the vile antisemitic screed of the Middle Ages calling a blood libel on the Jewish State, with accusations of stealing and killing the “blood of the innocent.” Where was the outcry back then?

This treatment harkens back to when the acting-President of the Palestinian Authority Mahmoud Abbas stood before the United Nations and denied the history and heritage of Jews in Israel, calling them “racists” and “colonial occupiers” committing “ethnic cleansing” of Arabs, to which he received a standing ovation. Abbas’s long history of Holocaust denial, vilifying Israel and promoting attacks on Jews was long ignored by the western press. It was only in April 2018 during a long-winded speech of vitriol that the media thought that maybe Abbas had gone too far. In fact, his speech included virtually all of his same antisemitic remarks he had used in the past. The only thing that was new was the sudden awareness of Abbas’s vileness.

It is incumbent on everyone to not be sanguine that the media and universities will call out the anti-Semites who are given podiums and positions of power. People must demand these voices of hate be stripped of those positions. TODAY, call and write Richard Englert, President of Temple University to remove Marc Lamont Hill. You are free to attach this article.

Concurrent with calls to remove the hated language and mouthpieces, should be the re-positioning of the Israeli posture. It is time to match – or better yet, mimic – the pro-Palestinian Arab slogans. Perhaps people will appreciate the offensiveness of the long-used Arab comments.  Or it will simply provide symmetry of the two opposing sides.

Here are some examples:

Israel has been under assault in the media and corridors of power, and the radical Islamists and alt-left progressives have been given tacit approval and encouragement to shout their blood libels louder. It is well past time for the pro-Zionist community to respond.

The Three Camps of Ethnic Cleansing in the BDS Movement

The Anger from the Zionist Center

The heinous slaughter of Jews praying quietly in synagogue on their Sabbath is an abomination in every way. It is not just appalling because innocent people were killed, but that the murderer’s rationale was based on the hatred of Jews.

It is right and proper for society to prosecute the killer and explore ways to keep such crimes from happening again. What is not Okay is for politicians and the media to turn the tragedy into political points.

But politics has become a “win-by-any-means” endeavor these days, for the politicians AND the media.

CNN posted an article on October 29, 2018 called “The Pittsburgh killings targeted Jews — and America’s soul.” The important sentiment of the title hides the contents of the article which could have a sub-header “Republicans are the reason for hatred and murder in America.” It was an article specifically drafted to place the blame for the murder, and antisemitism in America generally, at the foot of the Republican party.

Some quotes from the piece: 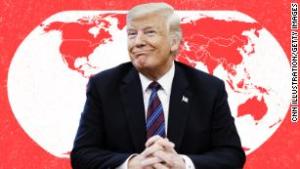 Picture alongside CNN’s article on anti-Semitic mass murder showing a smirking
President Trump with a caption “Related Article: How Trump’s nationalism
has already changed the world“
Not a single Democrat was included in CNN’s list.

If it cared to be balanced and actually address the issue of antisemitism in political discourse, CNN could have listed any of the following:

Many current and recent Democratic officials and those Democrats running for office have platforms that are against or vilify the only Jewish country:

CNN opted to remain silent on every one of these Democrat’s comments.

CNN was clearly not looking to have a discussion about politicians fomenting antisemitism; it’s aim was to place the blame for antisemitism solely on the Republican party.

Perhaps CNN should look at itself, and its own reporters like Marc Lamont Hill, whom it describes as “one of the leading intellectual voices in the country.” Here is Hill’s video about his visit to Nazareth in Israel – not the West Bank or Gaza, but unquestionably Israel according to everyone except for rabid anti-Zionists. He refused to recognize the existence of Israel an called it “Palestine,” “a land stolen by greed and destroyed by hate… we stand by the people who courageously struggle and resist the occupation.”

CNN has become a mouthpiece for radical left-wing anti-Zionists, and it now lambasts Republicans as anti-Semites in a moment of Jewish grief. It is beyond pathetic. It is reprehensible.

What Kind of Hate Kills?

CNN Makes Clear the Attackers and Victims in Gaza-Israel Fight

CNN Will Not Report Islamic Terrorism

This July 4, I am Leaving the Democratic Party that Left Me Long Ago

CNN Calls out a Massacre in Jenin, even though it is Israelis who are killed (music by Gorecki) What is really proportionate?