Using the term “provocation” does many things: it puts all of the blame completely on the person doing the provocation, and it implies that everything would be peaceful if the initiating party were not being belligerent.

The Palestinians deliberately voted for war when they elected Hamas to 58% of the government in 2006. They have made their preference for war and Hamas clear in poll after poll since that time, the latest being August 2014 which showed Hamas winning 61% of the vote. Just because the world prevents new Palestinian elections from occurring and leaves a straw-man in Abbas to act as president for six years after his term ran out, does not change that fundamental reality. The Palestinian war is eight years running with Israel responding three times (Cast Lead; Pillar of Defense; Protective Edge).

UN Secretary Ban Ki-Moon described the Israeli “provocation” of Jews moving into homes in the eastern part of Jerusalem. As detailed in the FirstOneThrough article below, the idea that there should be Jew-free zones is: blatantly anti-Semitic; was only instituted by the Palestinians and Jordanians from 1949-1967; and is against international law (including from the prior incarnation of the UN itself, the League of Nations), in the Palestine Mandate which forbade barring anyone from living in Palestine solely due to their religion.

Palestinians (and Jordanians) have used the term “provocations” often regarding Israeli action in Jerusalem. Some of those “provocations” have included actions such as:

A political music video on “provocations” with music by The Clash (Rock the Cashbah):  https://www.youtube.com/watch?v=v3fKXyxKixE 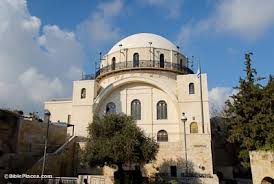 The rebuilt Hurva Synagogue (the original dates back 250 years)

The illegality and racism of suggesting a Jew-free region in Palestine: https://firstonethrough.wordpress.com/2014/10/02/obama-supports-anti-semitic-palestinian-agenda-of-jew-free-state/