The media – whether print or digital – are experts at what they do. They know what articles make people react. They know what motivates people to buy their newspapers and watch their news programs. They know how to drive tweets and retweets.

I therefore observe and review how they craft their craft; how they shape the stories they sell.

Photographs – even in papers that art the printed word – are the most engaging. They are no longer limited to tiny and grainy black & whites of decades ago; they are now displayed in vivid colors that convey a story and an emotion. The choice of which pictures to present, as well as the how and where, essentially prioritizes the news for the reader. For example, a color photograph on the top of the front page with an associated article in the far right column is the most news-worthy story of the day. If a photograph is small and in black & white in the back of the paper, alongside advertisements and other news stories, it would transmit the passing interest in the event.

With such understanding, I reviewed the New York Times coverage of the kidnapping and killing of three Israeli teenagers, and the killing of Arab children in the subsequent days.

On June 30, the NYT ran a cover story on the bottom of the page, including two color photographs, about two mothers of victims – one Arab woman from the West Bank and another Jewish woman. The caption stated that the Arab woman’s son was “killed by Israeli soldiers” (one would need to read the article to learn that he was pelting the soldiers with rocks and bricks). The caption added that the Jewish woman’s son was “missing”. The article continued on page A9, with black and white pictures of equal size showing each woman together with friends praying. The captions again repeated that the Arab boy “was killed by Israeli soldiers”, and that the Jewish boy “was abducted” with other boys.

On July 1, the NYT ran a cover story that the Israeli teens were found dead. The story ran on the left hand (secondary) column of the front page and had no picture. The paper did, however, include several color photographs in the middle of the paper, on page A8, of a prayer vigil, pictures of the three boys, and army jeeps near the discovery site of the boys. The caption reads that their bodies “were found”.

On July 2, the NYT did not have any cover stories about the killings of the Israeli boys. On page A4, it posted some black and white photographs of friends mourning at the gravesite of one of the murdered teenagers. The caption read that the boys were “found dead”. The associated article ran from page A4 and continued on page A20.

On July 3, the NYT posted a large color photograph on the top of the page of Arab women mourning and an associated right-hand column about the killing of an Arab boy (the trifecta – large color photo on top of page 1 and associated right-hand article). The caption said her “son Mohammed was found dead” included a quote from the mother of the dead boy “We don’t feel safe”. The cover article continued on page A8 with three additional color photographs of: Palestinian men clashing with Israeli police; Israeli police searching the crime scene; and the dead boy. The captions state that there was a “kidnapping and killing of a Palestinian teenager”.

Over these four days, if one were to just get news from pictures and their captions, what would a reader take away?

From the captions, it would appear that everything that happened to the three Jewish teenagers was passive. The boys were “missing” and their bodies “were found”. There was no mention of kidnapping or killing, nor any attribution of who was the aggressor.

Contrast that to the captions of the Arab boys who were “killed by Israeli soldiers” and another that stated there was a “kidnapping and killing of a Palestinian teenager”. The aggression described against the Arab victims was underscored by the cover article quote from an Arab woman that “We don’t feel safe”. Pictures and captions showed Israeli soldiers and police, but shared no sentiment of the Jewish women.

Further, the large color pictures on the top of the page with the Arab women mourning was the only time that the NYT gave the stories in the region prominence. The only time we saw a cover picture (on the bottom of page) related to the Jewish victims was when one of the mothers appeared alongside a grieving Arab woman in a story meant to convey balance in grief. In fact, the underlying message was not balance: the pictures and captions made clear that the Arab woman was a victim of Israeli aggression trying to find missing teens, while the Jewish woman still had hope that her “missing” son (not kidnapped) would reappear.

What does the NYT positioning of greater emphasis on Arab suffering convey to a reader? How do the pictures of Israeli soldiers in armored vehicles and border police with machine guns compare with Palestinians throwing rocks? Were the pictures and captions deliberately shaping a larger story than the immediate events?

Were people more likely to buy the paper or talk about it with friends? Does the Times believe that more readers sympathize with Arabs than Israelis? Does the NYT editorial board believe that Israelis are the aggressors and Palestinians the victims, even when this entire episode began with the abduction and murder of three Jewish teenagers on their way home from school? 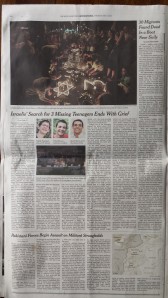 What do you think?

A troublesome series of reports in major “liberal” media outfits like the New York Times and BBC have shown a pattern of “blame the victim” uniquely when it comes to Jews and Israel.

Consider the BBC’s Nicky Campbell’s coverage of the kidnapping of three Israeli teenagers, Eyal Yifrach, Gilad Shaer and Naftali Frankel, in Judea & Samaria arguing that “Palestinians would say perhaps these people were in the West Bank illegally.” He then continued to discuss Arabs in Israeli jails to “give [the kidnapping] some perspective” as if the comments provided any justifications for the kidnapping of teenagers trying to get home from school. (I suppose Nicky would support Iraqis kidnapping his daughters because of the UK involvement in the Iraqi war.)

The New York Times followed on June 16 when it posed several questions regarding “the cavalier practice of hitchhiking” in the West Bank. Was the NYT suggesting that these boys were responsible for their own kidnapping?

The hitchhiking abduction coverage was not unique. The New York Times ran an editorial on 6/19/14 bemoaning that the New York Metropolitan Opera, “bowing to the wishes of Leon Klinghoffer’s daughters and other Jewish critics,” decided to not globally telecast an opera about the murder of a 69-year old American Jew by Palestinian terrorists. The Times thought that “the opera gives voice to all sides” as if the rationale of the murder of an elderly American confined to a wheelchair was worthy of serious consideration. The general manager of the Met, Peter Gelb, said that the composer “John Adams said that in composing ‘The Death of Klinghoffer’ he tried to understand the hijackers and their motivations, and to look for humanity in the terrorists.” Gelb and the Times have called the opera “a masterpiece”. I am considering the right term for the Met and the Times.

Somehow, these outlets believe that Jews bare at least partial responsibility for the crimes committed against them: Jews are not victims; they are vehicles to voice displeasure of the state of the Palestinian Arabs.

To illustrate and contrast the vileness of this targeting of Jews and Israel by these media outlets, consider the coverage of other crimes during this same time period.

The New York Times covered the sexual assaults of women in Egypt during the celebrations for new President Abdul Fattah al Sisi with appropriate disgust. It ran articles, editorials and op-eds that condemned the attacks. The Times did not run articles questioning why the women were out late among so many men. The paper did not suggest that the women were dressed inappropriately. It did not post articles by Egyptian clerics who describe the value of modesty for women and the inappropriateness of their being out among men. Because if the paper had done so, it would have served to validate the disgraceful attack and place blame on the victim.

Similarly when a young man, Elliot Rodger, went on a shooting rampage in California because he felt rejected by girls in his school, the papers did not post opinions that girls should be nicer to young men and consider their feelings. As is clearly obvious, doing so would be an insult to all of the innocent victims of the rampage.

The daughters of Leon Klinghoffer, Lisa and Ilsa, put it best in their letter to the editor of the New York Times on June 21: “Our 69 year-old father was singled out and killed by Palestinian terrorists on his wedding anniversary cruise in 1985 solely because he was Jewish. His memory is trivialized in an opera that rationalizes terrorism and tries to find moral equivalence between murderers and the murdered. Imagine if Mr. Adams had written an opera about the terrorists who carried out the 9/11 attacks, and sought to balance their worldview with that of those who perished in the twin towers. The outcry would be immediate and overwhelming. But ‘Klinghoffer’ is justified as ‘a work of art’ and an opportunity to ‘debate’ the Israeli-Palestinian conflict. This is an outrage.”

The media’s blind spot for Jewish victims in its visual field have left Jews in the dark ages of history once again. The “progressives” are developing a new Blood Libel, in which every Jew has a hand soaked in the misfortune of Arabs. They have turned the State of Israel into a new blood matzah, conceived and living in sin.  During the Dark Ages, Jews were accused of taking missing Christian children.  At present, the progressive press blames Jews for their own missing and felled Jews – sacrifices that must be made to uphold the evil Jewish State.

Can anything right the “left”? If the Royal Ballet were to perform “The Untimely Fall of Lee Rigby” with beautiful arias about the sorrowful tale of Michael Adebolajo and Michael Adebowale, the two people who were sentenced to life in prison for Rigby’s murder, would the press react? Would the British press cheer the “work of art” and celebrate the “humanity in the terrorists” who hacked a soldier to death on the streets of England to avenge the killing of Muslims by British forces? The Klinghoffer daughters believe the “outcry would be immediate and overwhelming,” from the press and public. While I agree, I fear that it would not cause progressives to rethink their attitude towards Jews. The new Blood Libel has caught hold.