J Street has long opposed Israel’s control and administration of lands that it won in the defensive war against Jordan in 1967.

Did J Street mind that this same United Nations did not care much for the rights of Jews to pray at their holiest spot? Seemingly, not at all.

In October 2016, UNESCO approved a resolution condemning Israel for a wide range of violations in Jerusalem. One of these rebukes addressed the Israeli government’s attempt to create a place for pluralistic prayer along the Kotel.

“19. Deprecates the continuing Israeli unilateral measures and decisions regarding the Ascent to the Mughrabi Gate, including the latest works conducted at the Mughrabi Gate entrance in February 2015, the instalment of an umbrella at that entrance as well as the enforced creation of a new Jewish prayer platform south of the Mughrabi Ascent in Al-Buraq Plaza “Western Wall Plaza”, and the removal of the Islamic remains at the site, and reaffirms that no Israeli unilateral measures, shall be taken in conformity with its status and obligations under the 1954 Hague Convention for the Protection of Cultural Property in the Event of Armed Conflict;”

The “new Jewish prayer platform” was being advanced by the Israeli government in collaboration with the non-Orthodox Jewish denominations to create a space for worship in an egalitarian fashion. As with all activities by Israel in Jerusalem – even the installment of an umbrella! (above) – the United Nations condemned Israel. 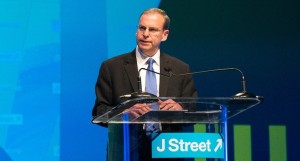 In its statement addressing the October 2016 UNESCO resolution, J Street never mentioned the United Nations attack on the advancement of non-Orthodox prayer at the Kotel. Instead J Street argued for the United States to restore funding for UNESCO which has been withheld after the organization admitted “the State of Palestine” as a member.

J Street would eventually tackle the issue, with a statement in June 2017 condemning the Israeli government on the decision to suspend the creation of an expanded Jewish prayer platform for egalitarian prayer. J Street attacked “Ultra-Orthodox parties” for being behind the Israeli government’s move. It then urged its loyal liberal backers to distance themselves from the current Israeli government:

“The current [Israeli] government, dominated by the far-right of Israeli politics, has made clear that it is out of step with many of the core values, beliefs and interests of the vast majority of American Jews.”

J Street had moved from lobbying the far-left US Obama Administration to lobbying Americans to condemn the Israeli government.

J Street’s positions often seem at odds with itself. It aggressively pushed the US to label Israeli actions east of the Green Line as “illegal,” but then condemned the Israeli government for not taking actions at the Kotel in the Old City of Jerusalem, where it claimed that the Israeli government has no legal rights at all.

Does J Street believe that the Israeli government has authority to create a place for non-Orthodox prayer at the Kotel or not? If the government has no legal rights, then why condemn it? If J Street was so comfortable in stripping Israel’s authority at Judaism’s holiest site and giving it to the United Nations, then why not condemn the United Nations assault on pluralistic prayer?

J Street is a far-left fringe group that does not represent most Americans or most American Jews, yet it lobbied successfully to push the US Administration to adopt a damaging resolution on the world stage with far-reaching implications – for ISRAEL. At the same time, J Street attacked the “far-right” in Israel for lobbying successfully for actions – in ISRAEL. Which is more outrageous? A fringe group of Americans damaging Israel on the world stage, or a fringe group of Israelis lobbying for actions in their own country?

The Evil Architects at J Street Take a Bow

The Fault in Our Tent: The Limit of Acceptable Speech