The Arab Spring began in December 2010 with a cry for help from a Tunisian street vendor who set himself on fire. The self-immolation quickly spread as widespread protests in other Muslim Arab countries where people sought to overturn backwards authoritarian regimes which were not accountable to its citizens. The masses were seemingly tired of the kleptocracy of the ruling class, the lack of investment in education and technology to enable a 21st century economy, as well as arbitrary rules and restrictions in daily lives. The western world assumed the multi-country protests would also lead to modifications to the entrenched religious laws prohibiting basic human rights like converting from Islam and women’s emancipation, and to the elimination of executions for “crimes” like homosexuality and adultery.

The dream faded for both the local Arabs and the West.

The West watched as Egypt threw out its autocratic regime to replace it with a democratically elected Muslim Brotherhood. Much like the Palestinian Arabs who voted the terrorist group Hamas to a majority of its parliament, it seemed that the Arab masses simply craved a different type of authoritarian regime. In short order, the brotherhood was tossed out by an Egyptian military takeover. Three regimes in Egypt in two short years.

The leader in Yemen departed only to have a civil war emerge with Iranian-backed Houthis on one side and Saudi Arabian-backed rebels on the other. There was no celebrating the change in government as death knocked on every door.

The local Arabs in Syria fought their own civil war. The Syrian leader was not able to quash the rebellion with a mere 20,000 dead as his father was able to do in Hama in 1982, and has slaughtered 30 times the number (and counting) with the help of Russia and Iran. Syrians now long for the old status quo when at least they had their lives and homes with the same maniac in charge.

But in August 2020, one small country was able to rise above old hatreds and backwards thinking. The United Arab Emirates announced publicly that it would recognize and normalize relations with Israel. While arguably a non-event for two countries which had never fought a war to establish political and commercial dealings, the break from the regional antisemitic thinking was shocking, meaningful and completely refreshing.

Over the last few years the Kingdom of Saudi Arabia decided to allow women to drive, Lebanon became more accepting of homosexuality and now the UAE has reached out to the Jewish State. While it may take many years for the Arab Spring to revolutionize the ruling class, at least some countries are moving past historic antisemitic, homophobic and misogynistic patriarchal sentiments. Hopefully more will follow. 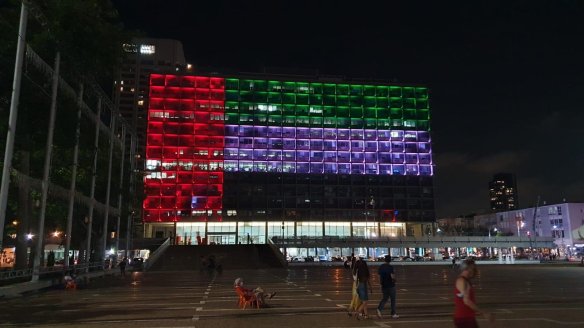 Is Israel Reforming the Muslim Middle East? Impossible According to The NY Times

Israel Stands Out Regarding Equality for Women

Maybe Truman Should Not Have Recognized Israel

Both Israel and Jerusalem are Beyond Recognition for Muslim Nations

Time to Dissolve Key Principles of the “Inalienable Rights of Palestinians”

5 thoughts on “The Arab Spring Blooms in the UAE”