People’s behavior is not uniform when engaging with different parts of society. Active and reactive actions and statements contort in unusual ways when it comes to Jews.

Consider politicians. When a White officer of the law harmed a Black man, the political class fell on its knees asking for forgiveness and specifically called for justice for Black people. But when a Black politician harmed Jews, the politicians refused to clearly condemn antisemitism.

The press highlights White racism against Blacks and Muslims as the motivating factor behind so many events but cannot fathom antisemitism. Even though Jews are more likely to suffer attacks than Blacks, Muslims or the LGBT community, the media reorients the narrative away from antisemitism to victims of preference. When The New York Times pondered that European pogroms calling for the death of Jews might be antisemitic, it watered down the story by noting there may have been a slight “tinge” of Jew-hatred. Repeatedly. In the US, the NY Times crafted stories about “pushy” Jews moving into towns in New Jersey and omitted the many stories of blatant antisemitism by those Jersey residents. The stories had a familiar echo to the Obama Administration which criticized Jews for moving into their homes in Jerusalem as “provoking tensions” rather than condemning the antisemitism of Arab residents who wanted a Jew-free neighborhood. The Times has even suggested a Noble Prize for a terrorist who killed several Jews.

Society has taken note. While “Je Suis Juif (Jew),” was echoed in the streets of Paris when terrorists targeted a kosher store for slaughter in 2015, Parisians did so in conjunction with “Je Suis Charlie” and “Je Suis Policier (Police)” who also suffered. But when only Jews were targeted, the streets of France were empty. Indeed, when other anti-Semites killed Jews in a kosher store in Jersey City, NJ in 2019, not only did people not come out to condemn antisemitism, they said that the Jews were at fault for moving into a predominantly Black neighborhood (seemingly educated by the media and politicians as noted above). Meanwhile “BlackLivesMatter” placards are pasted in storefronts from coast-to-coast in 2020 declaring solidarity with that minority group.

For its part, the United Nations made declarations against racism, Islamophobia and antisemitism but really only believes in the first two. It lashed out against tying religion to fanaticism to “protect” 1.8 billion Muslims, and then bashed a handful of “Jewish extremists” in the same breath. The nations of the world met at the UN to hand monies to Palestinians at the very moment Palestinian terrorists were firing hundreds of rockets into Israeli cities. The UN won’t even mention terrorism against Israeli Jews, stripping it from the record while it lists attacks when Palestinians are victims. Meanwhile, the BlackLivesMatter has surged to global attention.

Jewish leaders compound the issue. When they “confront” the rise in antisemitism and the killings of Jews, they publish bland placards which do not single out antisemitism but generic hate. 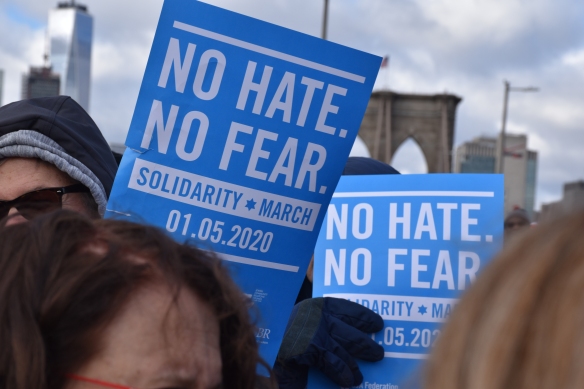 This cannot be said of the Black community.

Black leaders published a large manifesto and clearly called out that “Black Lives Matter” when members of their community were killed. They hit the streets toppling statues of perceived racists, got politicians to take a knee and newspapers to fire reporters considered un-“woke.”

The Black community even rallies around its worst, such as noted racist and anti-Semite Louis Farrakhan. Not so for the Jews who jettison their own haters in a jiffy.

As a Jew, I’m jealous of Black people. They effectively band together to make demands to which society genuflects and considers their checklist. Jews just fight internally about whether right-wing, left-wing, Black or Islamic antisemitism is the worst kind as they become further marginalized by all.

There are victims of preference which are being elevated and canonized, and other preferred punching bags which continue to be vilified and attacked. Jews know history, and envision a brighter future for many minorities in the former category but the same persecution for themselves in the latter.

Anti-Semitism Is Harder to Recognize Than Racism

Germans have “Schadenfreude” Jews have “Alemtzev”

WHY The Progressive Assault on Israel (and Jews)

The Joy of Lecturing Jews

The War Against Israel and Jewish Civilians

Related First One Through video:

11 thoughts on “Victims of Preference”