The World Zionist Congress is holding elections through March 11, 2020. There are fifteen slates running from across the political and religious spectrum. They represent roughly 1,800 individual candidates.

In the last election held in 2015, there were eleven slates representing 1,100 candidates. Reform Judaism took the greatest number of votes by a wide margin, surpassing the combined total of the Conservative and Orthodox slates.

In this WZC election, one of the 2015 slates – Green Israel – did not run again. Two slates modified their names and there are five new slates including Eretz HaKodesh (#1); Dorshei Torah V’Tziyon (#7); Kol Yisrael (#14) and Shas (#15, which was part of Ohavei Zion in the US).

The full list of slates is as follows (with the ordering / numbering having been chosen by the AZM at random):

As in the past election, the main distinction between the slates mostly breaks down according to religious and political philosophy as portrayed on the graphic below. 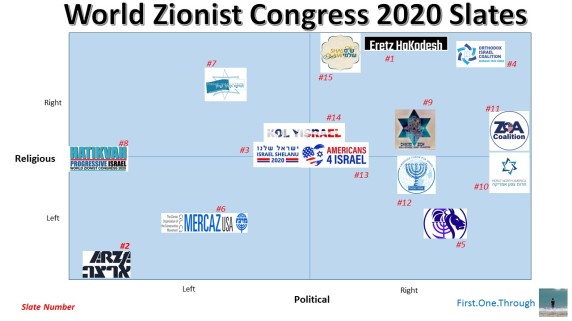 Religiously Oriented
From Most Right to Most Left

Politically Orientated
From Most Right to Most Left

Outside of Religion and Politics

The Jerusalem Program
and the Deserved Disqualification of Hatikvah (#8)

There are not many requirements to vote in the WZC elections. Most are basic criteria such as being Jewish, 18 years old, a permanent resident of the United States and not having voted in the latest Knesset elections. The more affirmative declaration asks people to accept the “Jerusalem Program.”

Key points of the Jerusalem Program highlight the particularity of Israel as the home of the Jewish people. For example:

The program clearly focuses on Israel as a Jewish State, not a bi-national state. The focus is on Jews, Judaism and Hebrew, not on Arabs, Islam and Arabic.

Yet one of the slates running for the WZC – Hatikvah (slate #8) – opposes those basic principles. Its members include The New Israel Fund, J Street, T’ruah, Americans for Peace Now. The New Israel Fund is actively trying to promote a bi-national state and tear down the distinctiveness of the Jewish State. J Street lobbied the US’s Obama Administration to enable United Nations Security Council Resolution 2334, which labeled the Old City of Jerusalem as illegal Occupied Palestinian Territory, the very opposite of settling Jews and strengthening the Jewishness of the country. Leaders of T’ruah loudly came to defense of Linda Sarsour, a vocal anti-Zionist. According to the philosophy of the far-leftist groups of Hatikvah, 11 million Palestinian Arab refugees from across the world – including Israel – should similarly have their own “World Palestinian Congress” to direct Israeli money towards Arab priorities inside of Israel.

While the groups in the Hatikvah slate stated they support the Jerusalem Program to get on the ballot, it has the equivalent honesty of the Pope saying he’s Jewish. It is a Trojan horse to break the very Jewishness of the Jewish State.

Competing slates hurt each other as there is a defined number of seats available. Two similar parties might end up losing a seat by dividing their votes, so it makes the most sense for everyone to rally around a single slate within a cluster which best represents their preferences.

Below are suggested slates to improve the probability of your vote having impact. While there are fifteen slates running, only six of them should be given serious consideration.

Non-Religious / Left-Politically: Vote Slate #3, Israel Shelanu. As noted above, Hatikvah (#8) should not be allowed to participate in the WZC as its actions and deeds are counter to the Jerusalem Program. The best platform is therefore with Israeli-Americans.

Non-Religious / No Politics: Vote Slate #14 Kol Yisrael. This group is about countering antisemitism and promoting Israel without getting into the common fights around the role of religion and politics. It’s appeal and mission are broad and inclusive. While Americans4Israel slate #14 has roughly the same mission, the two will dilute each other so people should rally around one. Vision, slate #7 is much the same.

Left Religiously / Left Politically: Vote Slate #6 Mercaz USA. While the ARZA Reform movement has been a dominant slate in the WZC for many years, its leadership has spent too much time bashing the government of Israel publicly and not using its platform to advocate for the Jewish State. Meanwhile, the Mercaz Conservative Movement has been a more constructive progressive voice while also demonstrating its ability to attract voices and advance its agenda.

Whatever your leanings, take the time to vote at zionistelection.org

J Street is Only Considered “Pro-Israel” in Progressive Circles

A Basic Lesson of How to be Supportive

Unity – not Unanimity – in the Pro-Israel Tent

There are Standards for Unity

The Anger from the Zionist Center

The Anti-Israel Community in a Jewish House of Worship