On December 1, 1955, a black seamstress in Montgomery, Alabama refused to give up her seat at the front of the bus for a white man. In those days, segregation, the law that kept races apart, ruled the land. While black people were allowed on public transportation, they had to cede their seats in the front of the bus to white people. On that day 64 years ago, Rosa Parks was defiant and would not cater to the indecent law. Riots ensued, but ultimately, in 1964, the United States passed the Civil Rights Act which desegregated society.

Eight years earlier, on November 29, 1947, the United Nations General Assembly voted to partition the remaining portion of the British Mandate of Palestine (the land east of the Jordan River had previously been handed to the Hashemite Kingdom at the sole discretion of the British), into distinct Jewish and Arab states. While the vote was designed to create peace by separating the two peoples living in the land by establishing two clear majority-societies based on religion and culture, it still sought to allow the minority populations to live, pray and work in the majority-ruled lands. To minimize religious tension, the holy cities of Greater Jerusalem and Greater Bethlehem were voted to be placed under an international regime.

But the Arabs rejected the partition vote as they considered all of the land to be Arab and Muslim, and launched a war to destroy the Jewish State. At war’s end, they evicted all of the Jews from the lands they conquered, including all of the holy sites in Jerusalem, Bethlehem and Hebron. The Arabs forbade any Jew from living, praying or visiting their Jewish holy sites during their period of control from 1949 to 1967.

The Arabs would try to destroy Israel again, with the Jordanian Arabs (and Palestinian Arabs whom had been granted Jordanian citizenship) attacking Israel in 1967, losing their illegally seized lands. Under Jewish control, Israel opened up the holy sites in Jerusalem, Bethlehem and Hebron and enabled everyone – even Jews! – to visit, but they opted to maintain the ban on Jewish prayer at Judaism’s holiest locations, the Temple Mount, hoping to placate the broader Muslim and Arab worlds.

The Arab and Muslim countries dug in deeper and turned the United Nations into a complete circus of antisemitic hate. While Palestinians began hijacking planes over the following decade, the other Arab nations advanced the political theory that Zionism was racism on November 10, 1975. After the United States finally led its repeal in December 1991, the Arab world advanced the same premise at the 2001 Durban Conference Against Racism, pushing the notion that not only should Jews be barred from living in parts of the holy land, but their refusal to acquiesce to antisemitic edicts was itself racist.

The September 2000 visit by Israeli Prime Minister Ariel Sharon to the Temple Mount coincided with Palestinian leader Yasser Arafat’s destruction of the Oslo Accords and launch of the Second Intifada which killed thousands. Rabbi Yehuda Glick’s advocacy for Jewish prayer on the Temple Mount in October 2014 also brought Palestinian terrorist to shoot him and launch a “stabbing intifada.” As the antisemitic Hamas Charter says, “Israel, Judaism and Jews challenge Islam and the Moslem people.” The presence of Jews in Muslim lands and holy sites is considered appalling.

The United Nations joined the chorus penned by over 50 Arab and Muslim nations that Israeli Jews should not be permitted to pray on the Temple Mount, nor live east of the 1949 Armistice Lines in the Old City of Jerusalem and in the “West Bank,” the lands which the Jordanians had seized. In December 2016, the UN Security Council, with the tacit approval of the United States’ Obama administration, passed Resolution 2334 which said that banning (not even segregating!) Israeli Jews is legal, and that such people have no rights to live and work in their holy land.

Today, there are hundreds of thousands of Israeli Jewish Rosa Parks who defy the notion that laws banning Jews from natural activities which others enjoy is in any way immoral or illegal. These Jews live in Judea and Samaria, in the Old City of Jerusalem and Hebron and fight for open access and prayer at their holy sites on the Temple Mount of Jerusalem and throughout the Cave of the Jewish Patriarchs and Matriarchs in Hebron. Perhaps it is time to erect a monument for these “settlers” at the UN Plaza, much as Rosa Parks got a statue in Montgomery, AL. 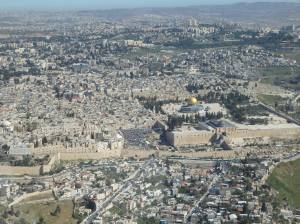 Jerusalem on Sukkot, a full Kotel Plaza,
but no Jews on the Temple Mount

Tolerance at the Temple Mount

Active and Reactive Provocations: Charlie Hebdo and the Temple Mount

A Native American, An African American and a Hispanic American walk into Israel…

Visitor Rights on the Temple Mount

Taking the Active Steps Towards Salvation

The EU’s Choice of Labels: “Made in West Bank” and “Anti-Semite”

The Green Line (music by The Kinks)

Israel Provokes the Palestinians (music by The Clash)

The Anthem of Israel is JERUSALEM