Political leaders normally engage with other political leaders. A president of one country would normally have meetings and calls with a person of the same rank from another country. On rare occasions, a politician would bypass elected officials and talk and negotiate with another county’s citizens, or maybe even third parties on behalf of those citizens.

Obama Bypasses the Knesset in Favor of Israelis

In March 2013, Israel invited U.S. President Barack Obama to visit Israel and speak to the Knesset, the Israeli parliament. Both of the two previous US presidents, Bill Clinton (1994) and George W Bush (2008) addressed the Knesset while they were in office, yet Obama declined the invitation. The administration explained that Obama had a speech for “the Israeli public and that really was our priority.” The White House arranged to have an audience of students from Israeli universities, except he barred students from schools located on the West Bank of the Jordan, to hear his remarks. 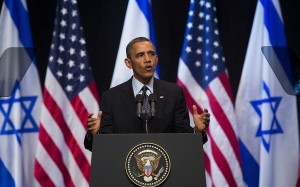 Obama spoke to this group of young Israelis as if the Knesset wasn’t a democratically-elected represented government of the people. He sought an audience which he hoped would be more receptive to his feeble efforts to denuclearize Iran and remove a sadist killer from the head of Syria. He appealed to the Israelis to give peace a chance with the Palestinians – directly. “Peace will have to be made among peoples, not just governments.”

His remarks about the leaders of Israel and the Palestinian Authority spoke volumes. He gave the Israeli leader a single mention, “I’ve reaffirmed the bonds between our countries with Prime Minister Netanyahu and President Peres,” while saying nothing about Netanyahu’s efforts to establish peace and prosperity – or really anything about the two Israeli leaders at all, just as formal points of contact.

Conversely, Obama’s comment about the Palestinian leadership made them out to be heroic figures seeking peace: “while I know you have had differences with the Palestinian Authority, I genuinely believe that you do have a true partner in President Abbas and Prime Minister Fayyad.  (Applause.)  I believe that.  And they have a track record to prove it.  Over the last few years, they have built institutions and maintained security on the West Bank in ways that few could have imagined just a few years ago.  So many Palestinians — including young people — have rejected violence as a means of achieving their aspirations.” Wars from Gaza in 2008 and 2012? Obama skipped those. The slaughter of the Fogel family in their beds in 2011? Abbas’ meeting in January 2013 to bring the terrorist group Hamas into the ruling government seemed to not be significant to mention. Or, more likely, a track record which Obama knew to be highly problematic.

Obama called for the Israeli youth to change their leadership to one more willing to make sacrifices for peace rather than for security: “Now, only you can determine what kind of democracy you will have.  But remember that as you make these decisions, you will define not simply the future of your relationship with the Palestinians — you will define the future of Israel as well.”

Obama’s efforts were all for naught. Netanyahu won elections in 2013 and 2015. Syria’s Bashar al-Assad still rules in Syria after slaughtering over half a million of his own people. Iran’s nuclear weapons infrastructure remains completely intact. The Palestinians continued to intensify their wars against Israel in 2014 and 2015, while Mahmoud Abbas gave speeches about Jews and Zionists which would have make Adolf Hitler blush.

Obama tried something new – and insulting to the Israeli government – and nothing changed, even now, many years later.

In June 2019, U.S. President Donald Trump would also try a new approach to the Arab-Israeli conflict.

With the political portion of his self-declared “deal of the century” still under wraps due to the pending Israeli elections, Trump’s point people for Middle East Peace assembled a conference in Bahrain to unveil the economic portion of his plan.

The Palestinians would not show.

Angered by various Trump moves over the first two years of his term as president including recognizing the fact that Jerusalem is Israel’s capital and moving the U.S. embassy to the city, as well as cutting aid to the broken United Nations agency which employees 30,000 Palestinians to hand out aid to the descendants of people who lived in Israel, the Palestinian Authority stayed away and urged others to boycott the event.

No matter. The team of Jared Kushner and Jason Greenblatt had a different audience in mind, just as Obama did six years earlier: the Palestinian people themselves.

The leadership of the Palestinians had long robbed the Palestinian people of a working economy, aid dollars and dignity. As detailed in the fascinating book Harpoon by Nitsana Darshan-Leitner, Palestinian leadership is rife with corruption. Yasser Arafat stole billions of dollars in aid meant for Palestinian Arabs and handed it to loyalists who kept him in power and funded terrorism at his command. The talent was passed to his successor, Mahmoud Abbas, who placates his henchmen with riches and supplies his terrorist families with money for life in a pay-to-slay program.

The newly unveiled U.S. economic program would pump $50 billion into the Palestinian economy over 10 years and generate 1 million jobs. The monies would come mostly from the region, including $15 billion in grants, $25 billion in low interest loans and $11 billion of private capital. It would be administered by new multi-country agencies, including parties from neighboring Lebanon, Syria and Egypt which house many stateless Arabs from Palestine (SAPs). The power of the purse would no longer rest in the corrupt biased U.N. agency nor in the Palestinian Authority.

Not surprisingly, the Palestinian Authority rejected it completely. No money, no power.

Both the Obama and Trump administrations took new approaches towards peace in the Middle East, with each bypassing elected leadership to engage with the people who would ultimately realize peace. Obama talked directly to the Israeli people and urged them to ignore Palestinian terror, Muslim pathological killers in their neighborhood and their elected leadership to imagine peace. Trump’s approach was both more obtuse and direct: he sent his envoys to meet with the leaders of other nations and revealed a plan to direct billions of dollars in investment into the lives of the Palestinian Arabs. Obama’s prose was celebrated even though it contained no details and ultimately delivered exactly that – nothing. Trump’s plan has been derided by the liberal media and politicians who await the core political portion of the “deal of the century.”

Obama used his oratory skills to woo the Israeli public to replace their leadership and to imagine a peaceful coexistence. Trump put forward an economic plan to the Arab region to effectuate an enduring peace by bypassing Palestinian leaders.

Obama’s efforts brought nothing to the region but more wars and millions of refugees. Time will tell what Trump’s plan will yield.

The Israeli Peace Process versus the Palestinian Divorce Proceedings

The Only Precondition for MidEast Peace Talks

The Time Factor in the Israeli-Arab Conflict

Removing the Next Issue – The Return of 20,000 Palestinian Arabs

Mutual Disagreement of Mediators and Judges in the Arab-Israeli Conflict

How the US and UN can Restart Relations with Israel

The Undemocratic Nature of Fire and Water in the Middle East

The Left-Wing’s Two State Solution: 1.5 States for Arabs, 0.5 for Jews

1 thought on “Taking it Straight to the People: Obama and Kushner”