Rep. Ilhan Omar is under the microscope for some poorly worded tweets and comments she made about Israel supporters over the past few weeks, so Sarah Jeong, a member of The New York Times editorial board has tried to come to her rescue.

Jeong assumed she would be a natural to help Omar since she got into hot water for tweets she made, but came out unscathed. Some of Jeong’s famous tweets included:

Jeong reached out to Omar to council her on bashing Zionists effectively. “You got to own it, girl,” she reportedly said. “The problem is that you didn’t lean in all the way. Bash those mother-f***ing white Jews and stare them in the face while you do it. With a smile, of course.”

Jeong worked with Omar in scripting some choice tweets to be unveiled at choice times during the rest of the year. Some of their current lines include:

Linda Sarsour thought the tweets were too clever and funny. She worked with Omar on a different set:

There were several tweets up in the air like “Sieg Heil,” because Jeong wasn’t sure people would get the context, especially since they weren’t sure when they would post it. The new hashtag #AntiSemitesLivesMatter was deemed too copycat of #BlackLivesMatter, and the line “I love reverse racism when it’s in the negative and not directed at me,” was considered too complicated and not re-tweetable.

Marc Lamont Hill gave his seal of approval on both sets of tweets and previewed that Omar’s draft of upcoming tweets were not anti-Semitic on Al Jazeera, AJ+, and several media outlets run by Arab and Muslim countries. “As a man of color, I can clearly tell you what is and what is not racism and hate speech. Everyone watching should feel completely comfortable re-tweeting and using the same words in public with pride.” 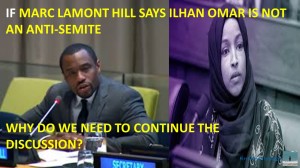 Meanwhile, Jeong is very busy trying to get Lamont Hill onto the New York Times editorial board.

“Protocols of the Elders of Zion – The Musical”