Judaism’s primary daily prayer has two common names in Hebrew, called the Amidah (because a person stands for the prayer), and the Shmoneh Esrei (which means “18” for the 18 blessings in the prayer). However, in reality, the Shmonesh Esrei has 19 blessings, as an additional one was added about 1900 years ago.

The nineteenth blessing was added by Jewish sages due to divisions within Judaism around the 2nd century CE. The background story resonates in some format today.

The Introduction of the 19th Blessing

After the destruction of the Second Temple in Jerusalem in 70CE, the traditional model of Temple service was terminated. In its stead, rabbinic Judaism as outlined by the Pharisees, began to take root as the new established norm. It included traditions such as the Oral Law, which became codified in the Gemara or Talmud.

A competing group, the Sadducee sect, did not believe in the Oral Law and rejected the Pharisees’ Gemara. In reaction to that rejection, according to the Gemara in Berakhot 28b and 29a, Rabban Gamliel, the leading rabbi of the 2nd century, considered how to minimize the influence of the Sadducee sect within the Jewish community. In an attempt to keep the Sadducees from infiltrating the minds and hearts of the nation, he had a new blessing composed against these “heretics” to be inserted into the Shmoneh Esrei. As detailed in Berakhot, the goal of inserting the new blessing in the primary prayer was that Sadducees would not join in such service which cursed their efforts, and would disassociate themselves from the community. How could a person stand in prayer with a community that was reciting blessings that cursed them?

Interestingly, the Gemara did not offer a more straightforward explanation of the blessing: that Jews wanted the efforts of these heretics to fail and were collectively rejecting their views of Judaism.

Here is the prayer, as translated in Orthodox prayer books today:

Today, the prayer is normally translated to be against as “slanderers” rather than “heretics” as intended 1900 years ago. The difference is significant in terms of intention, but perhaps less meaningful in terms of population, as discussed below.

The notion of condemning “heretics” was religion-oriented. These people were “enemies” of God, distorting His laws. They stood against God and were “arrogant sinners,” a corrupting force against organized and unified religious practice.

Seen from today’s perspective, heretics may mean people like “Jews for Jesus.” They are people who nominally state they are within the Jewish community but espouse views that are not in concert with Judaism. As opposed to Christianity, Islam, Buddhism and other religions which are viewed as completely distinct from Judaism and therefore neither addressed nor condemned, the blessing targets missionaries within the Jewish fold who seek to distort and undermine rabbinic Judaism.

Two thousand years ago, the Pharisees and Sadducees did not only split on religious matters, but also on political ones. While the Pharisees delved into the meaning and application of Oral Law, the Sadducees were more politically-oriented. The Sadducees conspired and worked with the Romans, reporting on fellow Jews. They leveraged influence not just for their own benefit, but to undermine and harm fellow Jews.

In modern times, slanderers could mean Jewish groups like “Jewish Voice for Peace.” This organization actively seeks to wage an economic war against all Jews living in the eastern part of the Jewish homeland and much of Israel as well. Another is “J Street” which actively lobbied the US Obama Administration to label Jews living in the Old City of Jerusalem and the “West Bank” as “illegal,” pushing passage of UNSC Resolution 2334.

The 19th prayer against heretics/slanderers found above is as printed in Orthodox prayer books today. This blessing has been deleted from the Shmoneh Esrei in Reform synagogues. There are a few possible reasons for the active deletion.

Reform Jews may have deleted the blessing as they did not want prayers to include condemnation of fellow Jews. Perhaps they sought a more positive spiritual experience during the prominent prayer service.

It is also possible that some of the editors of the Reform prayer books believed that the blessing was taking aim at themselves as either heretics or slanderers.

The concern regarding heresy is that Reform Judaism broke from thousands of years of rabbinic Judaism in many facets, including believing that the Bible was written by a human, not God, and that the definition of “who is a Jew” is not limited to matrilineal descent but could be passed down from a Jewish father as well.

As it relates to slander, the leading rabbis of the Reform movement are active in groups like Jewish Voice for Peace, J Street, T’ruah and many others that publicly call out Israel on the global stage. While they believe they are striving to hold Israel to a high standard, there is no question as to their criticizing fellow Jews. Knowing that the 19th blessing was composed by Orthodox rabbis who were trying to enforce conformity and control, deleting the blessing could have been an attempt to free themselves of traditional constraints.

Whichever reason, the Orthodox (and still the Conservative branch of Judaism) is in the minority in keeping the blessing, as the Reform, Reconstructionist and Jewish Renewal branches of Judaism have deleted it. The non-Orthodox branches are the largest in the United States and do not fear being marginalized like the Sadducees of 1900 years ago. They have their own synagogues and do not need to pray in the handful of Orthodox shuls where the blessing against heretics is recited.

In Jerusalem, there is a cemetery on Emek Refaim Street that is run by a group affiliated with Jews for Jesus. They consider themselves proud advocates for the Jewish State, but also seek to convert Jews. 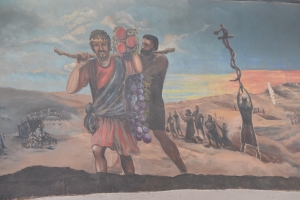 Mural from the wall above the cemetery in Jerusalem’s Emek Refaim Street
showing scenes from the Bible
(photo: FirstOneThrough)

While Israel allows all religions to operate openly within its borders, it prohibits missionary work. The heretics who run the cemetery know this, and are careful with how they distribute their literature, walking a fine line of sharing information while avoiding proselytizing.

The Jewish State has also begun to take a more forceful response to slanderers and those that actively seek to harm Israel and Israelis. Specifically, groups like Code Pink and Jewish Voice for Peace which lobby governments to sanction Israel and boycott goods are being stopped from entering the country.

It is likely not a coincidence that the government of Israel has begun to act against slanderers, and the fact that the Chief Rabbinate of Israel is a political creature which only has Orthodox rabbis. Orthodox Judaism seeks a protective fence around religious practice and the Jewish people, and the rabbis have no issues calling out people who break from the insular fold and bring in external political forces to harm Israeli Jews. A theoretical office of the Chief Rabbinate which included all of the other branches of Judaism would likely not only redefine who is a Jew and the types of marriages that could be practiced in Israel, it would also likely greet Code Pink with a welcome banner at the airport.

The Sadducees of 2,000 years ago ultimately faded away, while the rabbinic Judaism of the Pharisees became the established norm. Yet over the last few hundred years, new branches of Judaism emerged which initially only challenged the traditional rabbinic view of Judaism, and now confronts fellow Jews as well. It is the Sadducees Redux.

The divide within Judaism is not new; it was just dormant. The schism manifests itself when the Jews have power to control their own destiny, as opposed to 1900 years when they were helpless minorities scattered around the world. The questions for today are whether the Pharisees (Orthodox) or Sadducees Redux (Non-Orthodox/ Progressives) will prevail in defining the future of the Jewish people, and whether they will destroy themselves and the Zionist experiment in the process.

The Reform Movement’s Rick Jacobs Has no Understanding of Tolerance

A Basic Lesson of How to be Supportive

Unity – not Uniformity – in the Pro-Israel Tent

An Orthodox Rabbi at the Capitol

8 thoughts on “On Heretics and Slanderers”