The Palestinians in Gaza launched a rocket directly at the Israeli heavily-populated city of Be’er Sheva. The rocket destroyed much of the home, but luckily the Jewish mother rushed her children into the basement saving all of their lives.

CNN had an interesting view of the story on October 17, 2018. It ran an article titled “Gaza rocket hits Israeli city, prompting Israeli air strikes in retaliation.” According to CNN, the rocket originated from a region, Gaza, but not at the hands of a people, the Palestinians. However, the retaliatory strike was from the government of Israel. For CNN, the story of the Palestinians in Gaza is one of peaceful protests and victimhood, not of terrorism.

Consider other recent headlines about the conflict from CNN:

In headline after headline, month after month, CNN only used the word “Palestinians” when it came to people being killed. The attacks that the Palestinians launched are referred to in the headlines as stemming from “Gaza” as it did in the October 17 headline, or to the ruling entity in Gaza, Hamas.

In the body of the articles themselves, CNN attributed the use of rockets to Hamas or other groups, but labeled the Palestinians themselves as simply “protesters” or “demonstrators.” The most these protesters could muster was the use of “weaponized kites.” Overall, the Palestinian people themselves were regarded as peaceful, being randomly and unfairly killed by Israel.

On the other side of the border in Israel itself, CNN minimized the attacks against Israeli civilians. The October 17 article stated

“Footage from Israel Channel 10 showed damage to the fence and yard of the home. No injuries were reported. A second rocket landed off the coast of central Israel, Israel Defense Forces (IDF) Lt. Col. Jonathan Conricus said.“

There was a lot of footage on all of the media sites – including the picture above – that showed the entire second floor of the home in Be’er Sheva being destroyed. But CNN opted to make it sound like no physical structures were damaged and no people were at risk. Just a “fence and yard.” The attack itself didn’t warrant a picture to lead the story.

However, the Israeli response to the attack was definitely worth showing. 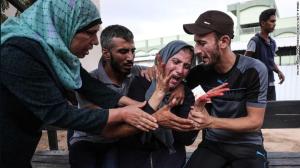 GAZA CITY, GAZA – OCTOBER 17: A relative of Palestinian man, Naji al-Zaanin, 25, was killed in a fresh Israeli airstrike in the Gaza Strip, looks at her blood-stained hands as dead body of Zaanin is taken to the Indonesia Hospital’s morgue in Gaza City on October 17, 2018. In a statement, the ministry identified the victim as Naji al-Zaanin, 25, in the attack that targeted the northern city of Beit Lahia. (Photo by Mustafa Hassona/Anadolu Agency/Getty Images)

This was the image that CNN ran atop its news story of a missile attack on a major Israeli city.

Further down in the article, CNN did show a picture of some damage to the house (but hard to make out) even after the article clearly stated that the damage was only to “the fence and yard.” 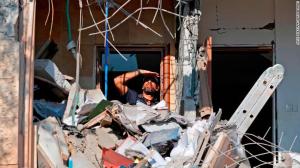 An Israeli sapper checks a house after it was hit by a rocket fired from the Hamas-run Palestinian Gaza Strip, one of the first projectiles fired in recent weeks from Gaza, on the central Israeli city of Bersheva on October 17, 2018. – Israel launched raids against targets in the Gaza strip today in response to rocket fire from the Palestinian territory that caused damage in a southern city, the Israeli army said. (Photo by Jack GUEZ / AFP) (Photo credit should read JACK GUEZ/AFP/Getty Images)

CNN is educating the world about the attackers and victims in the Palestinian-Israeli conflict. Are you getting the message? Are you responding?

CNN Will Not Report Islamic Terrorism