The morning of May 29, 2018 in Belgium was shattered by violence. Three people were killed in the city of Liege, including two police officers.

And that’s all that CNN would tell its readers. 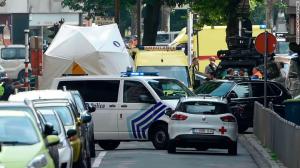 Police and ambulance are seen at the site where a gunman shot dead three people, two of them policemen, before being killed by elite officers, in the eastern Belgian city of Liege on May 29, 2018. – The shooting occurred around 10:30am (0830 GMT) on a major artery in the city close to a high school. “We don’t know anything yet,” the spokeswoman for the Liege prosecutors office, told AFP when asked about the shooter’s motives. (Photo by JOHN THYS / AFP) (Photo credit should read JOHN THYS/AFP/Getty Images)

It would not say that the attacker was a male, was heard shouting “Allahu Akbar,” that he had recently been released from jail, or that the attack was being investigated as terrorism. It did not report that the murdered police officers were women.

Was this select telling of #AlternativeFacts or simply terrible reporting?

The Guardian wrote about basic facts in the story, even if it could not report on it from its own sources.

“La Libre Belgique newspaper quoted a police source as saying the gunman shouted Allahu Akbar – “God is greatest” in Arabic – and had taken a woman hostage at some point in the attack.

The national anti-terrorist crisis centre, which interior minister Jan Jambon said was monitoring the situation, said terrorism could not be excluded as a motive though it was also looking into other possible reasons. “It is one of the questions on the table, but for the moment all scenarios are open,” a spokesman for the crisis centre said.”

SkyNews reported on the man’s name in addition to his history of crimes. Perhaps they do not mind giving the killer “fame” for his actions.

The Jerusalem Post went into much detail, including the stabbing murder of the two policewomen. It also detailed the history of Islamic radicalism in Belgium, assuming that the latest act was indeed Islamic terrorism:

“A Brussels-based Islamic State cell was involved in attacks on Paris in 2015 that killed 130 people and on Brussels in 2016 in which 32 died. The Brussels IS cell had links to militants in Verviers, another industrial town close to Liege, where in early 2015 police raided a safe house and killed two men who had returned from fighting with radical Islamists in Syria.

European authorities are deeply concerned about the risks of petty criminals, including those not from Muslim backgrounds, being inspired to Islamist violence while incarcerated.”

Reuters also made all of the above facts clear, including putting ‘Terrorist” in the headline of its report.

Yet CNN remained mum on all of these details.

Does CNN have fewer reporters in Belgium than media outlets in the UK or Israel? Was the best journalism it could muster was “Liege is Belgium’s third-largest city, after Brussels and Antwerp, according to the national tourist office. For centuries, it has been an important cultural and industrial center for the country.” Well, thanks so much for the thorough news analysis. Your fifth grade teachers would be very impressed.

People are getting more of their news from mobile devices than ever before, and relying on friends to source more of the worthwhile news sources, according to Pew Research. But news outlets still account for the origination of the stories.

If current trends continue, CNN will disappear faster than the facts it publishes.

The Ties that Bind (and Those Unmentioned)

11 thoughts on “CNN Will Not Report Islamic Terrorism”