Skip to primary content
Thomas Friedman, the three-time Pulitzer Prize winner for Middle East reporting seems to never be shy at demonstrating his complete ignorance, his willful naivete, and racist views on the region. 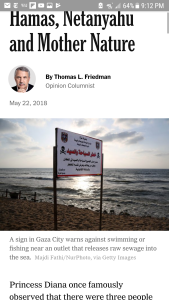 Friedman wrote an op-ed on May 22, 2018 that he “appreciate[s] the Gazans’ sense of injustice. Why should they pay with their ancestral homes for Jewish refugees who lost theirs in Germany or Iraq?” I am perhaps slightly glad he laid out that the basis for his sympathies was on a completely flawed view of reality.

The international community made a declaration that the Jewish state should be reestablished in the Jewish holy land decades before the Holocaust. The San Remo Conference in 1920 and the Mandate of Palestine of 1922 made it clear in international law that the Jews had a long history throughout the holy land, not just in the western part of the holy land.
More specifically, to correct Freidman:
1. Jews came back to reestablish themselves in their holy land. They did not come as interlopers into someone else’s homes.
2. The movement of Jews to Palestine was established in international law. This was not a Jewish invasion or act of Britain alone.
3. The international laws were passed decades before World War II and the Holocaust. Israel was not created as a reaction to the Holocaust.
4. Jews did not seek to evict Arabs. It was the Arabs that went to war with the Jews to keep them from moving back into their Jewish holy land. The state of Israel welcomed all Arabs to become citizens of the state and help in its development. The 160,000 that stayed (18% of the population in 1948) have grown to 25% of the population in 2017. The Arabs that left in 1948 went to war to destroy Israel and continue to threaten it generations later.

6. More Arabs than Jews moved to Palestine under the British between 1924 and 1948. Why deceptively call out Arabs’ “ancestral homes?” Because the New York Times wants to constantly pretend that Jews are not native to Israel, only Arabs are?

Friedman inverted plain facts. He proclaimed his sympathies with the Palestinians on the basis of lies.
Further, his prescription for a solution was packed with both falsehoods and racist ideas.

7. Hamas is not just “the Palestinian Islamist organization that rules the Gaza Strip.” It is recognized as a terrorist group by the US, Israel and many countries. And it was voted into a majority of parliament by Palestinians with full knowledge of these facts including having the most anti-Semitic charter in the world.

8. To state that Mahmoud Abbas and the Palestinian Authority is “secular, more moderate” than Hamas is to compare the fifth and ninth rings of Hell. Abbas is way more radical and extreme than Israeli Prime Minister Benjamin Netanyahu (who Friedman paints as being just like Hamas). Abbas is a Holocaust denier, denies the history of Jews in the holy land, calls for a country to be Jew-free, has laws that call for the death sentence for any Arab selling land to a Jew, pays for people to kill Israeli Jews, and names tournaments and squares after terrorists. How does this man and the PA remotely resemble anything moderate?

Friedman added to his fiction with jaundiced views about Jews and Arabs.

9. Why is Gaza Israel’s responsibility? Israel left the region in 2005 for the local Palestinian Arabs to rule themselves (for the first time in their history). Is the US responsible for Mexico’s welfare? Why isn’t Egypt called upon to handle the derelict region at its border? Does Friedman believe that Jews are uniquely responsible for neighbors?

10. “Two states for two people” as Friedman suggests means either that Jews can become a minority in Palestine the same way that Arabs are a minority in Israel, or it means that each country must be “pure.” Is Friedman suggesting that Israel expel its 2 million Arabs or is he suggesting 1.5 states for Arabs and 0.5 for Jews because Jews should be banned from the eastern part of the holy land, but not the Arabs in Israel? Either way, it sounds pretty racist to either expel non-Jews or ban Jews.

Friedman has not internalized that the Palestinians are no closer to welcoming their Jewish neighbors today than they were 100 years ago. He posits that the most antisemitic people should approach the border “with an olive branch in one hand and a sign in Hebrew and Arabic in the other, saying, “Two states for two peoples: We, the Palestinian people of Gaza, want to sign a peace treaty with the Jewish people — a two-state solution based on the 1967 borders, with mutually agreed adjustments.” What a moron.
Maybe the US special forces should have shown up at Osama bin Laden’s house with girl scout cookies and asked him nicely to stop killing thousands of people. Maybe he could propose that the Bashar al-Assad, the president of Syria should drop cotton candy on his people rather than chemical weapons. Friedman’s recommendations could have been written by a second grader with no comprehension of the world.

But Friedman knows the facts. He deliberately lifted from the deceased former leader of the PLO Yasser Arafat’s (fungus be upon him) 1974 speech at the United Nations: “I come to you bearing an olive branch in one hand and a freedom fighter’s gun in the other. Do not let the olive branch fall from my hand.” Friedman chose to ignore the plain and consistent fact that the Palestinians have chosen violence over coexistence with the Jewish State as he put forward a non-solution that fails to address the situation.

Perhaps Friedman’s fourth Pulitzer will be for young adult fiction.