Some countries note that Israel’s action on July 30, 1980 in which it declared that “Jerusalem, complete and united, is the capital of Israel,” was declared illegal by the United Nations Security Council.

Did countries recognize Jerusalem the day before on July 29, 1980? No.

Some countries say that they have not recognized Jerusalem as the capital of Israel because the “acquisition of territory by military conquest is inadmissible,” so they cannot recognize the eastern half of Jerusalem that was held by Jordan before the Six Day War of June 5 – June 10, 1967.

Did countries recognize the western portion of Jerusalem before the war on June 4, 1967? No.

How is it that so few countries EVER officially recognized Jerusalem as Israel’s capital, going back to the end of the war of independence? There was no controversy related to eastern Jerusalem during those 18 years until the Jordanians attacked Israel in June 1967, and lost the territory that they had illegally annexed.

Let’s be candid. The issue surrounding Jerusalem has always been about money, in particular, the Suez Canal in Egypt and the Arab world’s enormous oil wealth. Today, it continues to be trade, albeit it is much less important to the global economies than it was decades ago.

The excuse about the eastern half of Jerusalem which includes Muslim holy sites is a fig leaf covering the world’s lust for Arab money, from 1948 until today. 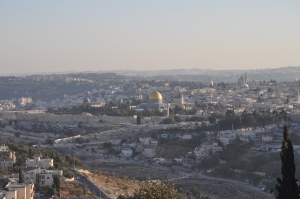 A view of the Old City of Jerusalem from Mt. Scopus
(photo: First.One.Through)

And the fig leaf is porous.

Countries already recognize the western half of Jerusalem as being an integral part of Israel. Further, many world leaders (including US Presidents Bill Clinton and George W Bush) came to Israel’s capital and addressed the parliament in Jerusalem. They recognized Jerusalem both as part of Israel and de facto as its capital.

Even German Chancellor Angela Merkel in March 2008 spoke at the Israeli Knesset. So when Merkel now states that “the status of Jerusalem is to be resolved in the framework of a two-state solution,” she unashamedly plays out the farce. Germany DOES recognize the western part of Jerusalem as part of Israel and as its functioning capital, but does not want to do it in an “official” capacity as it believes that withholding such recognition might enrich Germany through better relations and economic trading with the dozens of Arab and Muslim countries, and minimize the terrorism in Germany from Islamic extremists. As that seems a bit cold, Merkel put forward the red herring of seeking peace, as if recognizing reality somehow harms peace.

Let’s be clear: most of the world recognizes Jerusalem as Israel’s capital already. The farce of countries not “officially” recognizing Jerusalem is positioned as a prod that pushes Israel towards a peace agreement. But it is nothing of the sort. It is a calculated trade-off between the dignity of the citizens of Israel on one hand, against the commercial self-interest of trading with Arab countries on the other. It is therefore appropriate for Israel to rethink its own trading policies with countries which have no qualms in humiliating it on the global stage.

Recognition of Acquiring Disputed Land in a Defensive War

Both Israel and Jerusalem are Beyond Recognition for Muslim Nations

The New York Times Inverts the History of Jerusalem

The Invisible Flag in Judo and Jerusalem

The Custodianship of a Child and Jerusalem

Today’s Inverted Chanukah: The Holiday of Rights in Jerusalem and Judea and Samaria

Jerusalem, and a review of the sad state of divided capitals in the world

10 thoughts on “I call BS: You Never Recognized Jerusalem as Israel’s Capital”